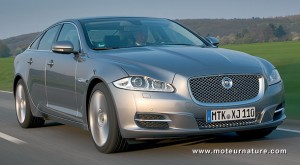 Mercedes launched something big last year. An S-class, its biggest model, with a small 4-cylinder turbo-diesel engine. The S250 CDI. Some people laughed at it, but there’s a market for a car providing the best comfort and luxury available, yet very cheap to run, with low CO2 emissions. This last part being more and more important, as company cars are taxed on their emissions in most of Europe. With better than 30-mpg in daily driving, the S250 CDI is getting popular. Of course, it’s much slower than a traditional V8-powered S-class. It requires 8-seconds to go from 0 to 62-mph, but that has proven adequate for many company car buyers. It’s still much faster than a Prius.

We know Audi responded with its A8 hybrid, and that BMW is working on a more efficient 7-series, but here’s another luxury car manufacturer which could soon venture into the thrifty luxury car market: Jaguar.

The British brand has just launched (in Europe) a diesel 4-cylinder version of its XF sedan. It could easily use that engine in the XJ too. A diesel’s already available in the XJ, a 6-cylinder. It’s making more than half the sales in Europe. A 4-cylinder would make the car cheaper, and that should mean even more sales. Actually, a 4-cylinder XJ would be a better performer than the 4-cylinder XF, thanks to the extensive use of aluminium in the big sedan, which makes the large XJ lighter than the XF. So it should also be even more fuel-efficient. A 35-mpg big Jaguar? That’s entirely doable, and the manufacturer’s currently evaluating it.

One thought on “A large Jaguar XJ powered by a small diesel 4-cylinder? Get ready for the green limo”