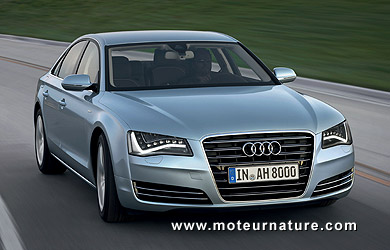 At first, it’s a bit shocking. We’re all in favor of better efficiency with downsized engines and hybrid technology, but we’re not used to see a large luxury limousine like the Audi A8, powered by a smallish 2-liter 4-cylinder. That’s what you’ll find under the hood of this A8 hybrid, and Audi has probably acknowledged that an inline-four might look out of place there: the manufacturer designed a coverall, so that you can’t tell what’s below. Noise from that small engine might also be a concern, but big Audis are so well soundproofed, that it shouldn’t be an issue. 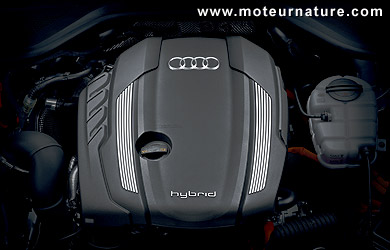 Actually, this A8 hybrid will be even quieter, thanks to an electric mode of operation. It’s low speed and short distance: 1.8-mile at 37-mph. But that’s better from what a Toyota Prius can achieve. That electric driving ability is made possible with the use of a 1.3-kWh lithium-ion battery. Unsurprisingly, the hybrid powertrain is the same as the recently introduced Q5 hybrid. That means a turbocharged 2-liter giving 211-hp and 258-lb/ft of torque, with a 40-kW (54-hp) electric motor making 155-lb/ft of torque. With both power units working together, the driver has 245-hp and 354-lb/ft of torque under the command of his right foot. It doesn’t sound like much. The V8 A8 makes much more power, and the diesel A8 has more torque. 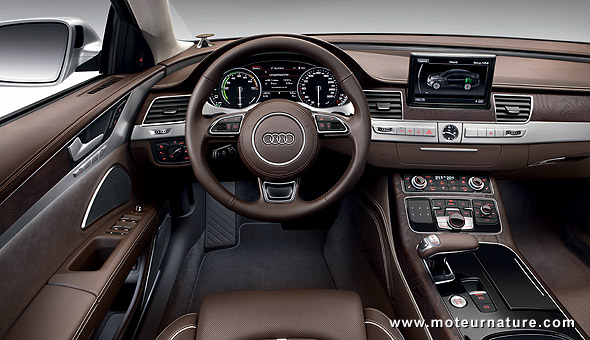 Fortunately for it, the A8 hybrid as a trump card: a 36-mpg rating (combined). Its CO2 emissions also are class leading, and that should be a strong point for company car buyers which are taxed on CO2 in most European countries. Like every other parallel hybrid, the A8 has an electronic brain to control at all times which drive unit (gas, electric or both) sends power to the wheels, and when the electric motor should be regenerating energy. Besides the limited electric-only driving mode, there are 2 others, D and S. The first one maximizes fuel economy, while the second favors performance. Note that the car always starts in D.

Coming from Audi, there’s little doubt that the hybrid tech will work the way it should, and get the aforementioned fuel economy, but the price is much more of a reason for concern. The pricetag should be around 80,000 euros (about $115K), and that’s an awful sum of money for a 4-cylinder car. Let’s hope buyers would not give too much importance to this… Detail. It’s efficiency that matters, as long as performance is adequate, and it is. Top speed is 146-mph, acceleration 0 to 62-mph requires 7.7 seconds. If only a cab driver could afford it, this A8 hybrid would be the best taxi in the world. But it’s more likely to become the limousine of choice for green-minded business executives in Berlin or London. And everywhere in Europe, but only in Europe, as it shouldn’t be sold elsewhere. This should be confirmed at the official unveiling of the A8 hybrid, next month in Frankfurt.

The Audi A8 hybrid is 30% more efficient than a Lexus LS600h! It has much less performance, but that won’t be felt in city traffic…