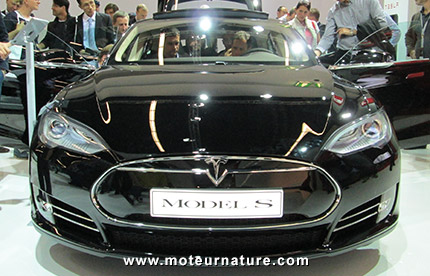 EV sales were much surprising in Europe last month. Tesla Motors, the American start-up, has beaten Renault, an established car maker with more than 100 years of history. Renault has said several times it wanted to lead the EV market, and it’s the only manufacturer with three models on offer, but that wasn’t enough to compete against Tesla. The Renault Zoé, a car perfectly sized for Europe, found only 629 customers last month. Renault also sold 20 Fluence Z.E. and 435 Kangoo Z.E.

Next to that, Tesla has sold more than 1,000 Model S in Europe in November (527 in Norway, 408 in the Netherlands, 61 in Germany…). So the Tesla Model S vastly outsells Renault’s best-seller, the little Zoé, and more than that, Tesla has also sold more passenger cars than Renault, considering that more than 90% of all Kangoo are commercial vans (customers can get it as a family car or as an utility).

The Nissan Leaf remains the best-selling electric car in Europe (1183 sales in November), but the Model S is getting very close. Besides sales volume, if we consider cash flows, things are even more startling. With the Tesla sedan more than twice the price of the other EVs, Tesla Motors had a larger income selling electric cars in Europe than Renault and Nissan combined!

Admittedly, it was a low month for the Zoé, but we guess it’s time for a strategy rethink. Renault should give up its idea of selling its electric cars without the battery, and lease it separately. This is a deal-breaker for many customers. Selling the Zoé in Norway, Europe’s largest market for EVs, would also help. A small technical issue prevented this so far, but the Zoé should be available in Norway early next year. So Renault sales should improve, but that’s also true for Tesla which has many customers waiting in Germany.