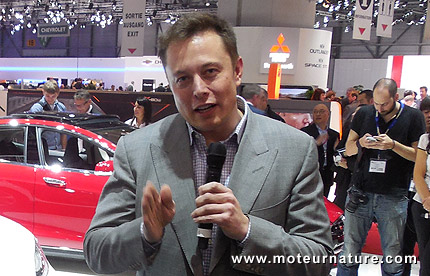 Elon Musk, CEO of Tesla Motors, was at the Geneva motor show today, and I had the opportunity to interview him with other European journalists. Tesla’s CEO first said his cars would use the Mennekes Type 2 plug for the European market. This was highly expected, and it’s simply great news. European EV market will only get better if all manufacturers commit to a single plug. The challenge is that both Tesla models, the S and the X, shall remain compliant with Tesla’s proprietary technology. This to allow Tesla drivers to plug on the European standard charging network, and to the Tesla upcoming network of superchargers as well. On this subject, Musk said he will launch a superchargers network in Europe just as he has already started in the US. Electricity will be free and unlimited to Tesla drivers, and it will be green coming from solar sources.

But when asked about when and where (and I asked him twice, since he didn’t reply the first time), Musk gave no details, nor did he make any commitment. So it’s best to advise Tesla customers to get a 11 kW wallbox in their garage. That’s the minimum a Model S requires with its large 85 kWh battery. Fortunately, a 230V 50A wallbox is quite affordable in Europe (about €1,500 with standard installation). But potential customers must learn that the Tesla Model S may not have got European Type approval yet (Musk wasn’t clear on this point either), and that the car still has to be modified to work with the Type 2 plug. Musk said that first European deliveries are planned in July however.