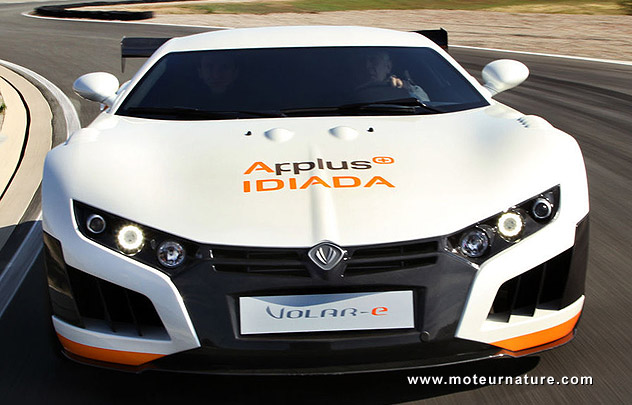 There was something highly unusual at the Catalunya racetrack a few days ago. Normally, the Northern Spain track is used by Formula 1 race cars during testing sessions, but a silent car drove there. An electric car called the Volar-e from engineering firm Applus+ Idiada. This was the car maiden laps, but the car was not totally new. This Spanish Volar-e is based on the Rimac, the Croat electric supercar. With more than 1000 hp and 737 lb-ft of torque from four motors, this is a super fast car, though it’s different because of a much smaller battery (only 38 kWh), whereas the Rimac has a 90 kWh pack.

Applus+ Idiada doesn’t give any indication about range, it only says only that a full charge doesn’t require more than 20 minutes, thanks to the use of a quick Combo charging system. We may also note that on the track, the charging station was Portuguese. There are no details about the motors nor the battery, but the car is expected to do other demonstrations like this one, to show the world how fast and how good it is. We may not expect more. This Volar-e shall remain a one-off. That means we do not quite understand the purpose of this Spanish prototype, but the electric supercar is real. Rimac will definitely build his car, if only in very small volume.