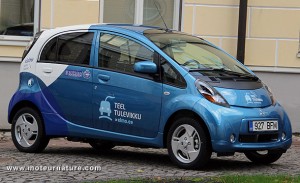 We don’t write much about Estonia. A very small country in Northern Europe, few people know anything about it, but here’s something good. The Estonian government ordered a fleet of 507 electric cars. All Mitsubishi i-MiEVs. The deal was signed last Spring, and it was the largest order Mitsubishi has ever received for electric cars. 50 were delivered earlier this week, with the remaining cars scheduled to arrive this winter. But you need to know the size of the country to understand how huge that order is.

Estonia has a a population of 1.34 million. If the U.S. with its 312 million people were to order EVs on a similar car-to-people ratio, that would make a staggering 118,000 cars! I haven’t been able to find out how many cars does the Estonian state owns, but there’s no doubt those 507 cars will make a very significant share of the total, reducing the CO2 emissions of the country.

Mitsubishi will also help the government creating charging infrastructure, as it has done already in the Principality of Monaco, Iceland, Denmark, Singapore, Thailand. Where next?

One thought on “When it comes to electric cars, the Estonian government is leading the world”