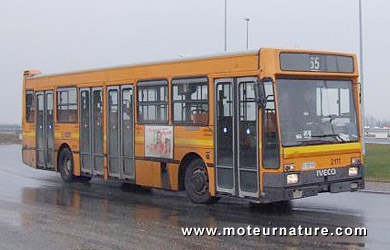 Now that Pininfarina has ceased all its production work, the Italian company is free to concentrate on its core activities: design and engineering. This concept highlights the latter, it’s a hybrid bus: the Hybus. It’s not a concept as we’re used to, totally new, built from scratch. The engineers wanted to make it real, so the starting point was an old Iveco Turbocity. A well-known bus all over Italy as there are thousands of them in daily use. This one belongs to Gruppo Torinese Trasporti (GTT, the pictured on top coming from www.mobilitatorino.it). 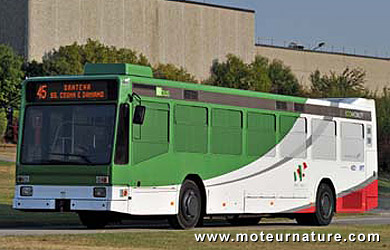 The idea was to update this bus with a new and much greener powertrain. This would be cheaper than buying a brand new bus. Pininfarina estimates that outfitting its new drive train into an old bus would cost about 40% of the cost of a new bus. Not surprisingly, the engineers chose an electric propulsion. It comes from two motors from Magnetti-Marelli, the largest supplier to the automotive industry in Italy. The batteries are from FAAM, another Italian company, with the whole thing is arranged under a serial hybrid configuration. 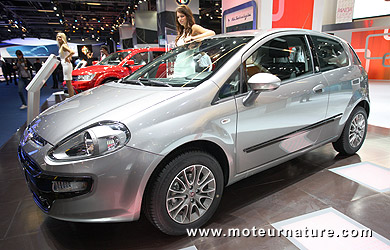 That requires an ICE and the engineers have been really bold choosing one. They selected a small and efficient diesel, a cheap mass-produced engine. They found it under the hood of a Fiat Grande Punto (left picture). A small car engine to power a big bus! This turbo-diesel makes 95-hp from 1.2-liter. Repeat that, a 1.2-liter engine to power a bus! We shall add that this bus only drives in the city. Top speed doesn’t need to be higher than 60-kph (37-mph). So power doesn’t matter much, torque does, but the electric motors have plenty of it. 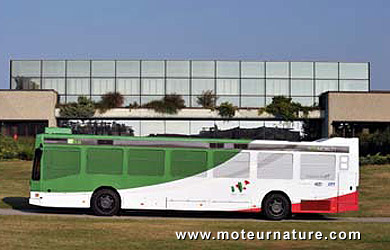 You may worry about reliability. The standards are different, and nobody drives 500,000 miles in a Fiat Punto. The engine isn’t built to last this long as the ICE from a bus is, but we shall consider replacement cost. The complete engine from a Fiat Punto costs less than the injection pump on a bus engine… The Pininfarina Hybus is a fully running prototype, which has been painted with national Italian colors (that’s the 150th anniversary of the country’s unification) and will now be evaluated. Of course, it sounds crazy to replace a huge 9.5 liter diesel with a small 1.3-liter. This is unheard of. Nobody would have ever thought of such a downsizing, yet somehow it may work, with an incredible 75% improvement in fuel economy.

Could it be real? Time will tell.

3 thoughts on “The Pininfarina Hybus, an incredible hybrid bus with a small Fiat diesel car engine”