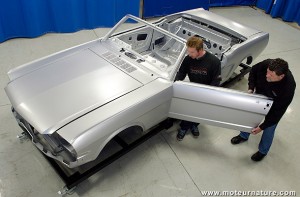 Everybody knows that a new car is better than an old one, but some people just think that old cars have more charm. They’re also easier to work on, but they can’t drive as good as the latest models. A new Ford Mustang offers better safety, better road manners, better performance and much better fuel efficiency (with the 305-hp V6) than any other Mustang in history.

Yet some people don’t want a new Mustang. They want the first generation Mustangs, the famous 64 to 66 models. Ford found out that there are so many of them that it was possible to build a business case around them, with the sale of new sheetmetal. This sounds quite crazy but when early Mustang lovers have so much trouble finding a clean rust-free body, or fixing one which isn’t, there’s no doubt they would appreciate to get their hands on some new metal. That is now possible. The Dynacom Classic Bodies company will build complete 1964 Mustang body shells. They are Ford-licensed and Ford-approved: they are the real thing. Well, actually, they’re even better.

Today’s steel is higher-grade than the original, new bodies are fully rustproofed, and with modern welding techniques, those new body shells are more rigid than the originals. Though early Mustang convertibles were notably poor in that area. In fastbacks, which were better, racers had to install a cross-member bar (a Monte-Carlo bar) under their hoods. Other parts can also improve brakes and suspension, and it’s also possible to put on a modern engine with better fuel efficiency, and fewer toxic emissions.

The end result will not match a new car in any way, but for those few who insist on driving an early Mustang, any improvement counts. The new 1964 Mustang body shell costs $15,000.