Since the Fiat group took control of Chrysler, we learned that Chrysler would sell European-designed cars. The Fiat 500 is the first one, but the other side of the agreement is that European brands, most notably Lancia, which is Fiat’s upper brand in Europe, would get American models. The Chrysler minivan will no longer be sold as a Chrysler in Europe, but as a Lancia. More interesting, the Chrysler 300 has transformed itself into the Lancia Thema. I haven’t seen the new 300 yet, but I can testify that the Lancia Thema is much more than a cheap relooking of a 2004 Chrysler.

It’s very significantly improved, and better in every way than the original model, it also has more modern powertrains. The Hemi V8 with a 5-speed auto transmission won’t be sold in Europe. What we’ll get is the new 3.6-liter V6 with a brand new 8-speed auto transmission. With more gears to keep the engine in its best operating range, the Thema got a 28-mpg combined rating on the official European cycle. That’s pretty good for a 290-hp full-size sedan. 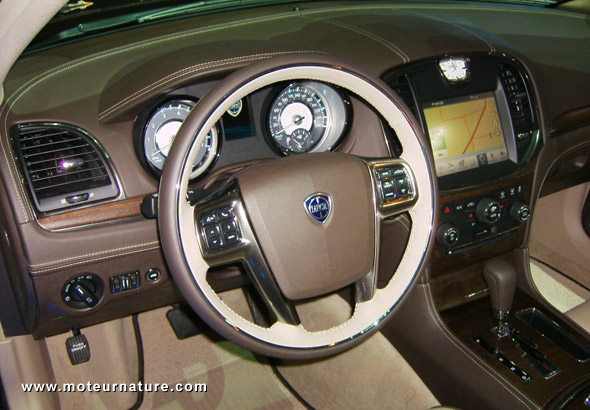 A diesel is also available, a 3-liter V6 which comes in two flavors: 190 or 225-hp. Official fuel economy figures aren’t available yet, but there should be even better. Sadly, this diesel won’t be offered on the American market, but the 8-speed automatic should arrive in the fourth quarter, and the availability of the Lancia Thema will be delayed till this transmission is available. This makes the difference between the American and European market.

The Chrysler 300 is available today in the US with an old 5-speed nobody would buy in Europe. The car just drinks too much fuel. That’s OK with Americans, but there’s no market for such a car in Europe.