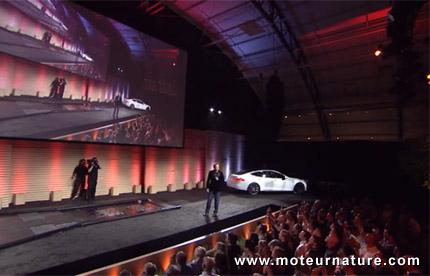 Tesla Motors had announced it would unveil something faster than its 120 kW superchargers. We weren’t sure of what to expect, but what it was quite a surprise to learn it was a battery swap system. A bit of a disappointment too. Though it’s no easy task, the battery of a Model S is more than 1300 pounds. So it’s an accomplishment to have engineered a system which swaps one in barely 90 seconds. Elon Musk seemed very proud to show that its system was twice as fast as an Audi A8 filling up. But we shall add an A8 refills much less often than a Model S needs recharging. According to the EPA, the Tesla sedan has a 265 miles range, whereas a diesel A8 (more than 80% of sales in Europe) has a 846 miles range. Sorry, but if you drive long distances, the diesel car is the fastest option.

More than that, it should be said that comparing the times of a battery swap and of filling up a fuel tank is like comparing apples with oranges. Trailers and caravans have exchangeable butane gas bottles, and it would easy to design a car with an exchangeable fuel tank. That would allow a valid comparison, which should turn to the advantage of the gas car, since a fuel tank is much smaller and lighter than a battery.

It’s also possible to imagine faster fuel pumps. In Le Mans endurance race, cars are filled up in less than one minute. Finally, after the bankruptcy of Better Place, it’s a surprise to hear again about battery swaps. At least, Tesla Motors manufactures its own battery packs, so it will have a better insight of costs. The first battery swap stations should open before the end of the year in California, but one big question remains unanswered. Are Model S owners interested?