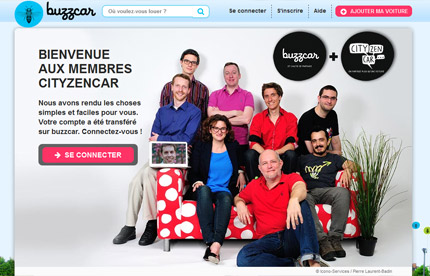 When one thinks of car sharing in France, the first thing which comes to mind is Autolib, the leading Parisian service. Yet there are other services, with some managing to be larger, with many more cars, but much less capital invested. This is car sharing between individuals, where car owners rent their cars to people who don’t own one, with the organizer collecting a small fee for having got the two in contact. RelayRides is probably the leading service in the U.S. and Buzzcar was a leader in France, with Cityzencar a distant challenger. No longer, Buzzcar has just bought Cityzencar for an undisclosed sum.

The result is an organization with more than 55,000 members, with about one out of seven owning a car. It has grown fast, and it keeps on growing since there is a snowball effect in that field. The bigger gets even bigger, while the smaller services stay what they are. There are still questions about the business, with many car owners still hesitant about handing their car to some stranger, but it’s a fact that the business is growing. Buzzcar is investing to get a bigger share of it.