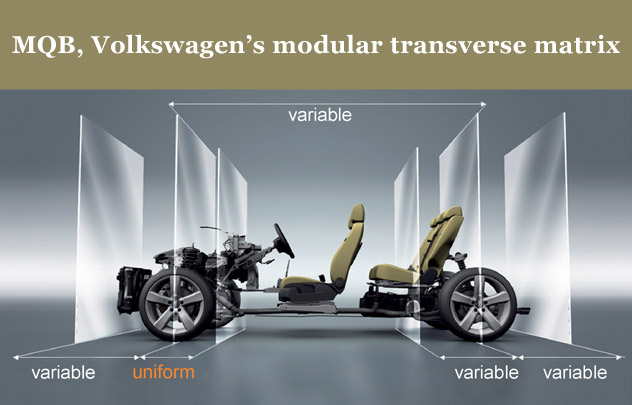 Volkswagen introduced something new this week. It’s not a car, nor an engine. It’s more like a set of common parts for different models. Volkswagen calls it Modular Transverse Matrix (MQB in German). The goal is to lower production costs with more parts standardization between totally different models. It doesn’t sound like it, but MQB is a very, very big deal. Volkswagen’s goal is to build more than one million cars around it. Every quarter.

The Modular Transverse Matrix will be shared among many Volkswagen models, from the Polo (not sold in the US, it’s Fiesta-sized), to the Golf and the Passat. Most models from Seat and Skoda, two other brands from the Volkswagen group, will also use MQB, the Audi A1 and A3 as well. All included, there shall be more than 60 different models using the MQB. It means it will be everywhere, on every road all over the planet. Of course, standardization is not new to the automotive industry. More than 80 years ago, Duesenberg was building sedans and speedsters on a shared chassis. When the automobile industry switched to monocoque construction, we began talking about platforms. A technology where Volkswagen is a leader. Just look at a Golf then at a new Beetle. Both cars look totally different, yet they’re perfectly similar under their bodies. The MQB intends to give even more freedom to the designers.

What will now be shared among so many VW cars are all the parts between the front axle and the accelerator pedal. Yet MQB is flexible, the front track width is not fixed. The Polo will remain smaller than the Passat. MQB will also allow all wheel drive and and an electric motor, but its biggest assets will be with the more popular front wheel drive 4-cylinder model. All ICE will be inline-fours, gas or diesel, transversely mounted, inclined 12° to the rear, with the intake in front and the exhaust in the back. All this is expected to make millions of Volkswagen cheaper to build, and provide a huge competitive advantage to the German group. We already knew that the automotive industry is a game for giant companies only, but we see it only will get more and more difficult for smaller players.