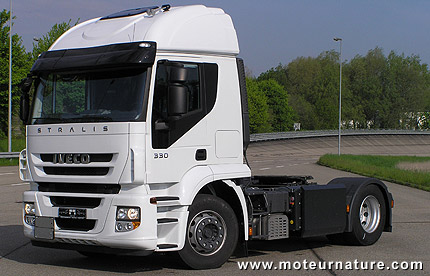 When U.S. President Barack Obama’s unveiled a tax break for commercial trucks that run on natural gas, last week, Americans were not the only ones to listen. Europe has been looking in the field for quite a few years. In many cities, more and more buses are running on CNG (Compressed Natural Gas). Cars running on CNG are getting popular in Italy, as are vans and light trucks in Germany, heavy trucks could follow. This is what Iveco would like after introducing this Stralis. It carries 187 pounds of CNG, which allows a range of 280 miles. Not much by truck standards, but Iveco believes it should be enough for some customers.

There is no difference in terms of performance. Engine gives 330-hp and 959-lb-ft of torque, and this truck is fully certified for the heaviest loads in Europe (40 tons). Yet besides having CNG stations accessible to large trucks on major roads, there is still a lot to do to convince truckers to give up diesel fuel.

One thought on “Big trucks on natural gas, Europe’s going the same way as the U.S.”