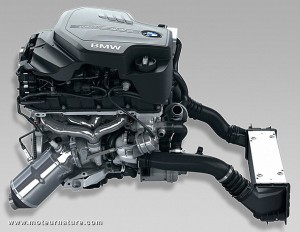 Fisker Automotive, the manufacturer of the stunning Karma hybrid, will unveil a second model next year. Code-name is Nina. It’s expected to be substantially smaller, more affordable too, but it shall retain the Karma’s best feature: a plug-in hybrid power train. This requires an ICE, which Fisker doesn’t manufacture. And it doesn’t have any plan to do so. It must resort to a supplier, and it just found one: BMW.

Fisker Automotive will buy turbocharged 4-cylinders from BMW, and that is nothing but amazing. Of course nobody will complaint about the quality. BMW makes the best engines in the industry. Their efficiency is as famous as their power but they don’t come cheap. BMW’s engines may also be too powerful. The most powerful BMW four makes 245-hp, while the least makes no less than 136-hp. Is so much power needed in a plug-in hybrid? The theory says that the power comes from the electric motor, with the battery playing the role of a buffer. If more power than the ICE can provide is needed (when accelerating hard), the battery will provide it. There is only one reason to choose a strong ICE in a plug-in hybrid: to make it able to sustain high speed driving.

We guess that’s Fisker’s goal, otherwise a 50-hp engine would be enough. And the BMW signature useless. Besides that power question, we note the large dimension of the contract, as Fisker says BMW could provide up to 100,000 engines a year. We’d rather know the minimal number, how many engines Fisker is committed to buy whatever the circumstances, but that isn’t revealed.