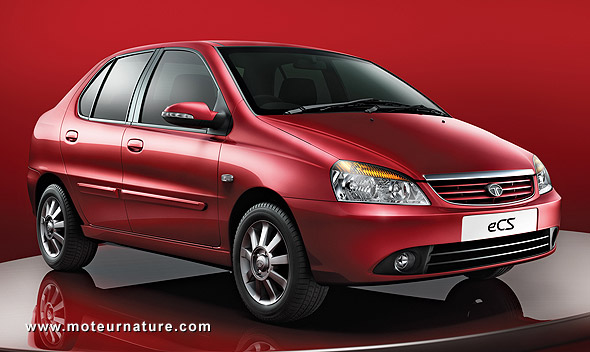 Diesel fuel sippers are non-existent in the U.S. but they are best-sellers all over Europe, as well as in India. Actually diesel’s market share is increasing fast in India, and it will grow even faster with the availability of this new Tata. Tata got world-famous when it launched the Nano, a complete car for about $2,500 but it’s most successful model is the Indica. It’s a Yaris-sized hatchback, which is also available as a sedan with the name of Indigo.

The Indigo pictured above is a special version, named e-CS without much inspiration, tuned for efficiency, which sounds good. It has longer gearing, better aerodynamics and low resistance tires, an optimized ECU, Tata says it’s getting 58-mpg. A very impressive value that would equal the best of Europe, whose car-makers keep leading on performance.

The Indigo’s turbo-diesel engine is 1.4-liter making 70-hp with 103-lbs/ft of torque. Both values are very low by international standards. That’s 50 hp per liter and 73 lbs/ft per liter. The average European diesels make about 75 hp per liter with 140 lbs/ft per liter. So Indian motorists are still substantially behind, but we shall expect them to get closer… This Tata Indigo e-CS sells for about $12,500 in Delhi. Sadly, you can’t think about importing one to Europe or America. It wouldn’t meet emissions regulations.