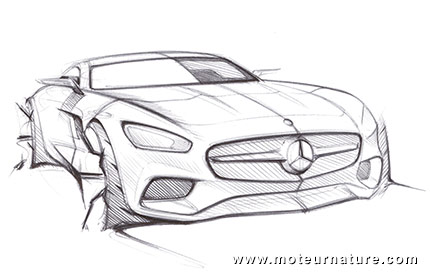 Talking to Auto Motor und Sport, the German auto magazine, Gorden Wagener, Mercedes’ head of design, says the brand will unveil next year a concept with specifications very close to the all electric BMW i3. Why not? Historically, the ranges of BMW and Mercedes have always been close, they’re each other’s most direct competitor. Mercedes launched its sleek CLS sedan, BMW answered with its Gran Coupe model. BMW unveiled the X6, Mercedes will have a competitor in a few months.

Of course, there are some oddities like the Mercedes SLS AMG, or the BMW i8, but what about the i3? Should Mercedes competes with the electric city car? Gorden Wagener tells us the brand with the 3-pointed star has green-lighted a concept vehicle. So it’s still a long way from a production model, but there might be an opportunity to do much better than BMW, and that could do wonder for brand image. BMW made a poor choice when it created the i3. It chose a small battery. It has about 15% less capacity than the one in the Nissan Leaf, the world’s best selling EV. The Kia Soul EV, which will launch in a few weeks, will have even more, with 25% more capacity than the BMW i3.

Considering Mercedes and Tesla Motors are partners, it would be quite easy for the former to get a larger battery pack from the latter, and make an i3 competitor with 25% more range. And the ability to use the superchargers, to enable much faster charging than BMW currently offers. Tempting? Let’s Mercedes decides.

In the meantime, Wagener says there will a slightly less powerful, and slightly more affordable, version of the upcoming AMG GT (our illustration), a supercar which will be unveiled next month at the Paris motor show.