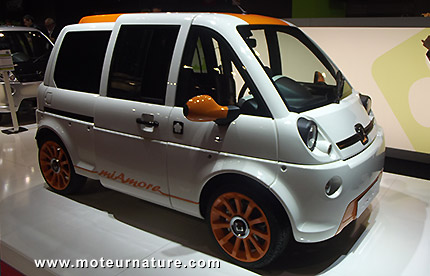 The proposition was not very exciting. A city car with very little power (18 kW peak), a short range (8 kWh battery) and poor build construction. OK, the car was cute, and convenient for the city with its large sliding doors, but drivers looked elsewhere when they went car shopping. Basic gas cars were cheaper with real road credentials, and the little Mia just couldn’t compete. Many people would like to buy a cheap EV, but very few people are ready to give up on everything that makes a car enjoyable to drive electric. Then, there’s the Renault Zoé. A safe and well-built car, with three times more power, twice the range, which doesn’t cost much more. Unsurprisingly, the Mia had few takers.

Local politicians didn’t understood this logic, and the money they gave to support the company is now gone. Mia Electric was already under a court’s protection scheme, since it had been through difficult times for more than a year, but the court abruptly declared bankruptcy. The company’s losing money, and keeping it afloat only increases its debts, so better stop it. Actually, production had already been brought to a halt because of some suppliers which have stopped their shipments since they haven’t been paid.

So it might sound like a sad story, but we shall see it as a sign of the EV turning into a mature market. Now that several leaders from the car industry have entered the market, it’s getting much harder for the smaller players with less sophisticated products. From that angle, Mia Electric’s disappearance isn’t so bad, as it makes the average electric car available new better.