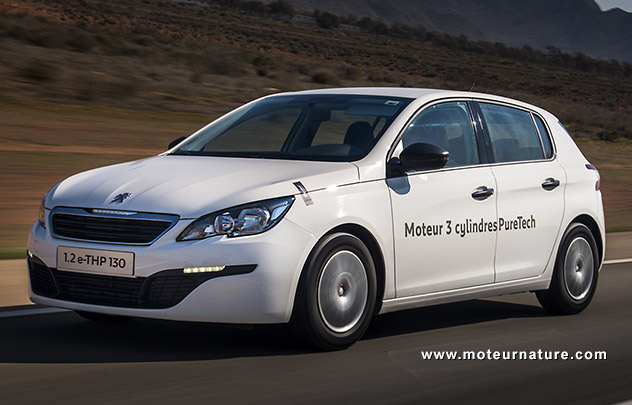 Cars used for fuel economy records are most often diesels, or hybrids, but here’s one with a conventional gas car. Well, maybe not so conventional after all. Peugeot’s doing this to show how efficient its new PureTech engine is. This is a 1.2 liter turbocharged and direct-injected 3-cylinder. A much downsized engine, but with 130-hp, it’s perfectly adequate for the Golf-sized Peugeot 308.

The 308 won the European Car of the Year award earlier this month, and it’s selling briskly. So much that Peugeot had to hire extra workers to add another night shift, and the car will probably be even more successful with this new highly-efficient engine. A team of Peugeot drivers took a 308 to Almeria’s racetrack in Spain, and they drove it till the tank got empty. That took 1124 miles!

Admittedly, the driving conditions were ideal, on a smooth track, and the team drove at a slow, constant speed. The car needed 32 hours to cover the distance, so average speed was below 40 mph, but 82.5 mpg is absolutely incredible fuel consumption for a non hybrid gas car. Real world fuel economy will be way above that, but at the very least, it shows that Peugeot’s new PureTech engine family can be incredibly efficient in the best conditions.