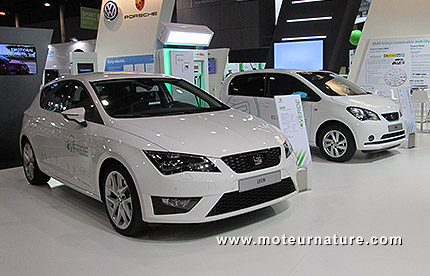 When one thinks of Spanish cars, one doesn’t think long because there’s only one brand: Seat. And it doesn’t even make any original cars. The Spanish brand belongs to the Volkswagen group, and all Seat models share all their mechanical parts with Volkswagen models. The Seat Mii (car in the back on our illustration) is a sister model to the Volkswagen up! and the Seat Leon (car in front) is the Spanish VW Golf. As EVS27 took place in Spain this year, Seat had a large stand, showing plug-in models but they were not for sale.

Nobody shall expect an electric Seat anytime soon. Nor a plug-in hybrid model. There was an electric version of the Mii and a plug-in hybrid Leon at the EVS27 but neither are planned for production. Both models will be launched as Volkswagen models, and the expected sales volumes at this time are just too low to justify the development of corresponding Seat models. Spanish drivers will have to buy Volkswagen-branded cars, but it’s only temporary. As soon as sales increase, the Volkswagen group will be very quick to launch plug-in Seat models.