Motor show give the opportunity to see every car on the market, but MotorNature specializes on green cars. Here are in alphabetical order all the cars which had a green flavor at the Tokyo motor show. 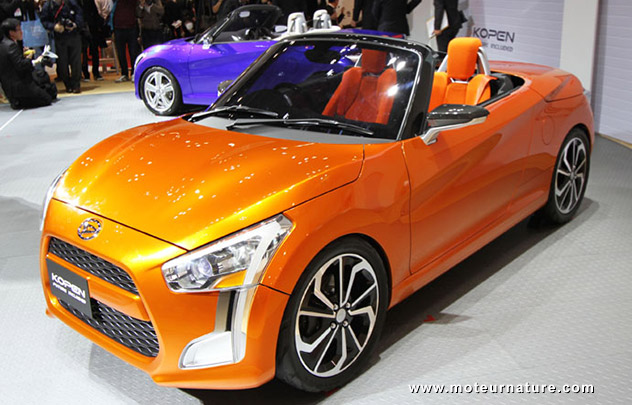 This is a very small car. Smaller than a Triumph Spitfire for those who know old British cars. It’s not a hybrid nor an EV, but it shows that great fuel economy doesn’t necessarily needs high tech. If the package is really small, fuel consumption will be accordingly small. The trick is to make a small car cute, and Daihatsu did it according to us. 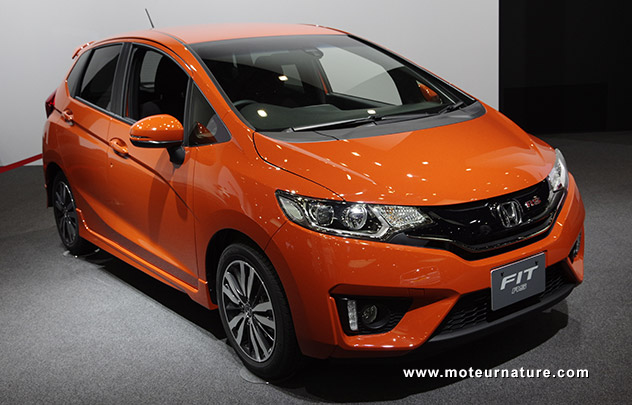 One of the reigning small cars, the Honda Fit has just been launched in a new generation in Japan. There’s again a hybrid version, but our illustration show a more surprising sporty RS version. No word about its availability outside Japan. 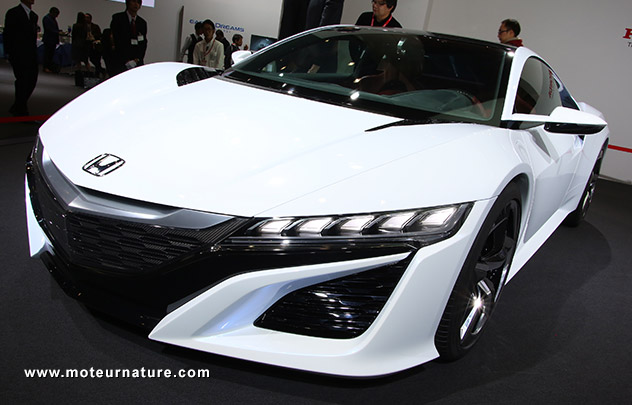 A fantastic sports car when it launched in 1990, the future NSX promises to be even more fantastic because it should mix exceptional performances with low fuel consumption thanks to its trick two motor hybrid system. Expect the production version in 2015. 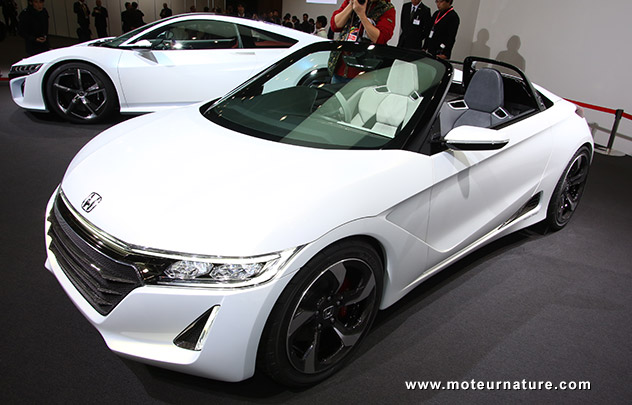 Just like the Daihatsu Kopen cited above, except that this little Honda is even cuter. A much roomier CR-Z may be a better choice for daily use, though. 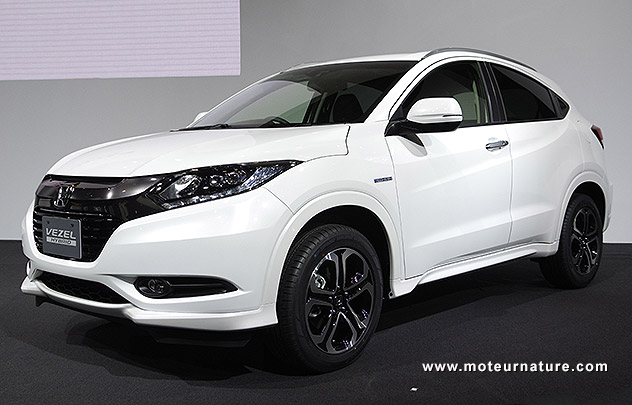 The CR-V is a great compact SUV, and this one promises to be just as good, only a bit smaller, and with much lower fuel consumption since it’s a hybrid. It’s a production model launching next month in Japan, and it should be available worldwide next year. Our only hope is that Honda finds a better name than Vezel for exportation. 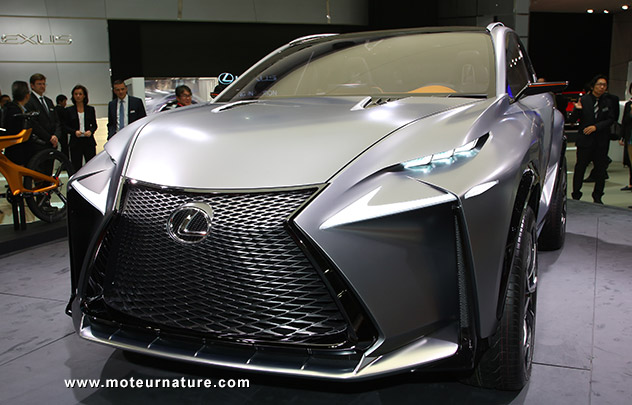 This concept was in Frankfurt with a hybrid drivetrain, and it was in Tokyo with a brand new turbocharged four-cylinder. It will take time to get used to its styling, but the new engine shall win friends more easily. It should appear in a production Lexus as soon as next year. 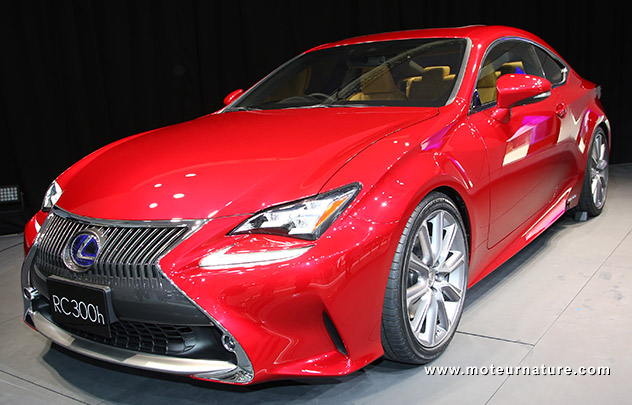 One of the most beautiful cars of the show, and it was a production model. Ever since the demise of the SC400 coupe, the Lexus brand lacked a sexy model, it’s no longer the case. 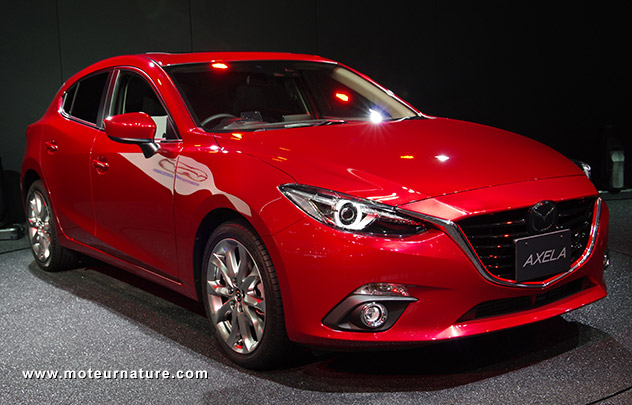 The Mazda 3 is called Axela in its home country, and another difference is in the availability of a hybrid version. It was conceived with Toyota’s technology, but there’s no certitude yet about its exportation. 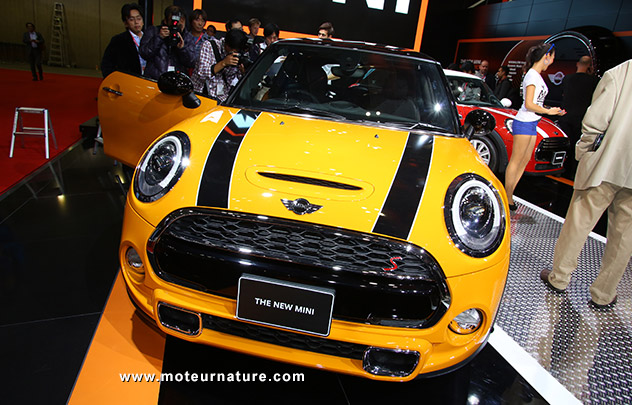 A new Mini was unveiled in Tokyo and it’s more fuel-efficient than ever before but a big surprise is in the front overhang. No Mini has ever had one. Is it still a Mini if it doesn’t have its four wheels at each corner? 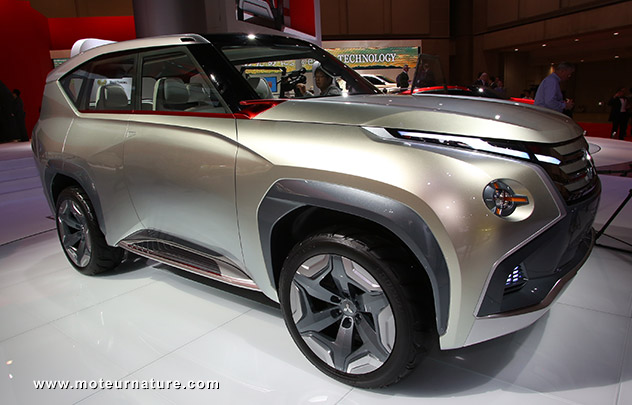 Mitsubishi unveiled three concepts in Tokyo but this is the only one which looks like a runner. A future Pajero (called Montero or Shogun in some markets) may look like it, and it would definitely come with a plug-in hybrid drivetrain. 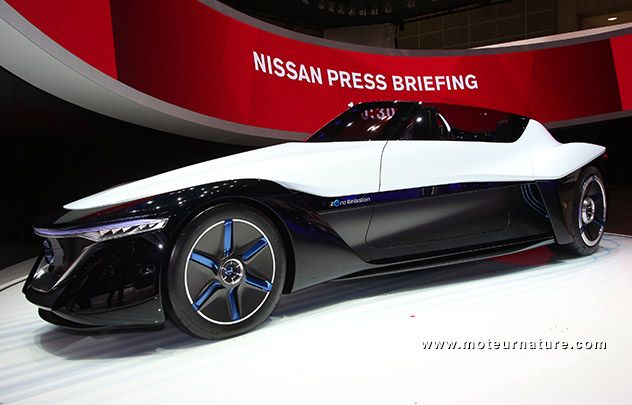 It’s hard to believe but Nissan says this electric BladeGlider concept could really turn into a production vehicle. Nothing’s sure, but no one shall rule out the possibility of a production car with a narrow front track like this one. 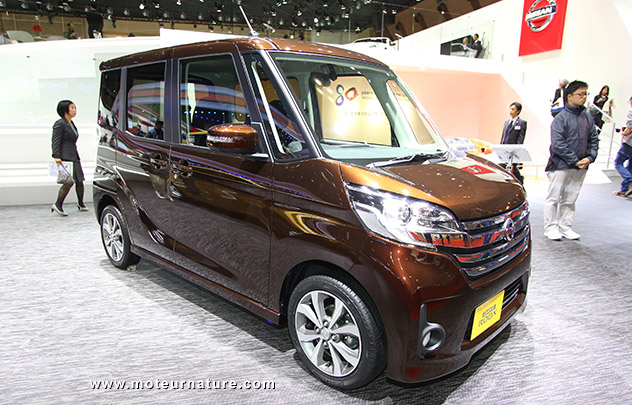 There’s a legal class for smaller cars in Japan, the kei-cars. This new Nissan Dayz Roox is one of the best of them. Its squarish look may not look fancy to western eyes but no car can beat it on space efficiency. 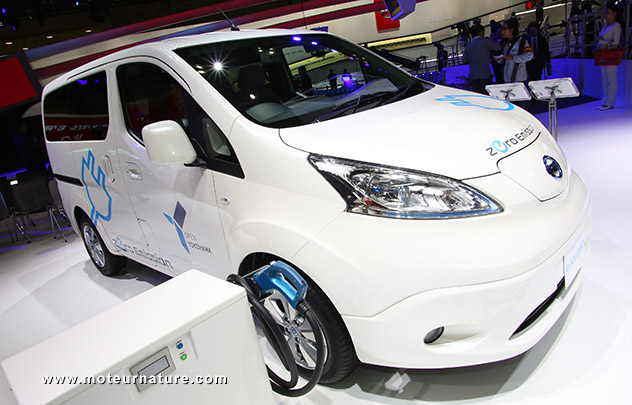 This electric minivan has already been shown at many shows but Nissan has finally committed to a production date. Next year. It will be available in Japan, Spain and some other selected markets. 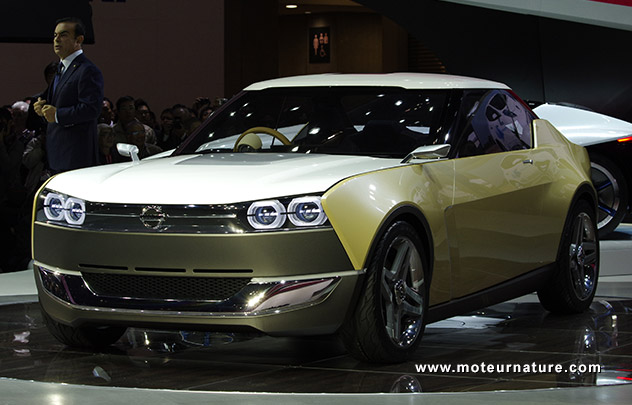 This is the concept of a small sports car, and it’s a winner. Best car of the show according to us. It’s not a hybrid nor a EV, but it’s small and light, and that’s enough to make it green. Engine is a turbocharged 1.2-liter with a CVT to keep the revs down when driving quietly. 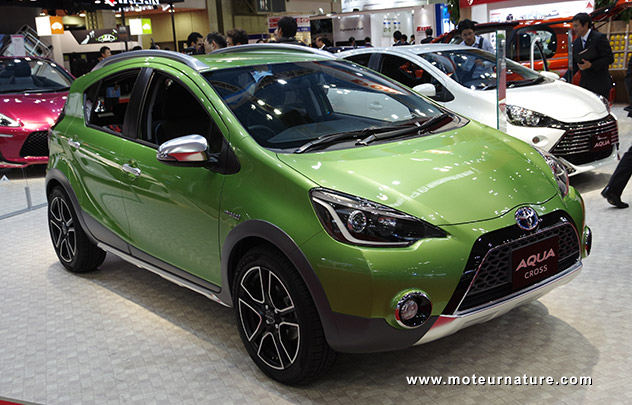 Little Toyota Aqua (Prius c in America) was unveiled in concept form with this amusing soft off-roader look, and we bet a production version will soon follow. It wouldn’t cost much more, but it looks way more fun, so let’s do it. 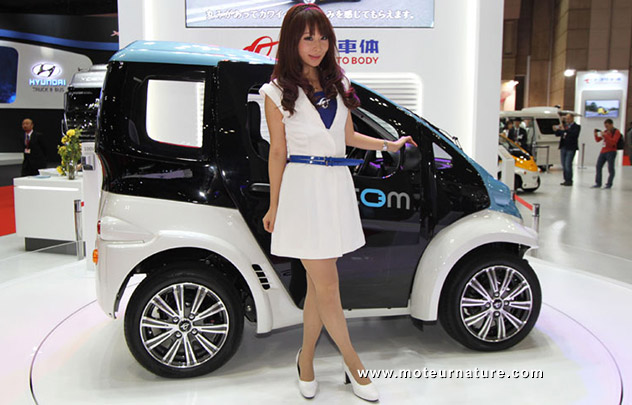 This is Twizy-like vehicle, but more sophisticated, with real doors and a roomier back seat. It’s only a concept but it’s been built with support from the Japanese ministry of transports. 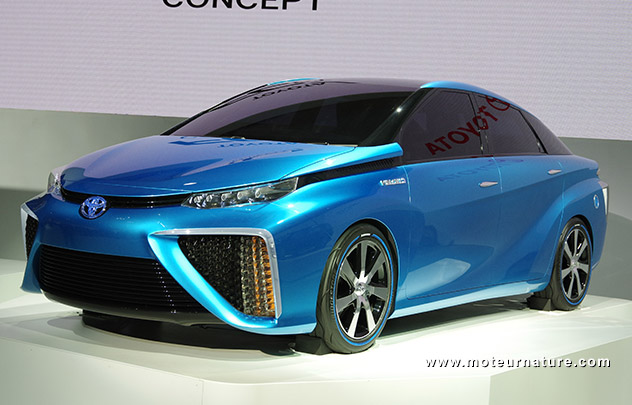 A fuel cell car. The world has seen many concepts already, but this is the real thing. It will be produced in volume starting in 2015, and it shall be available in Japan, America and Europe. The big question is about its price, and there’s no sure answer about that yet. 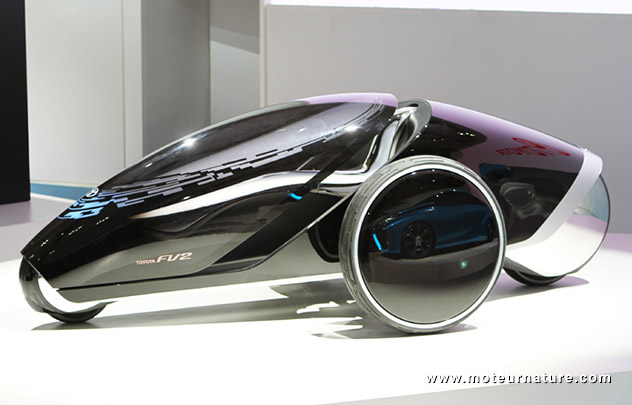 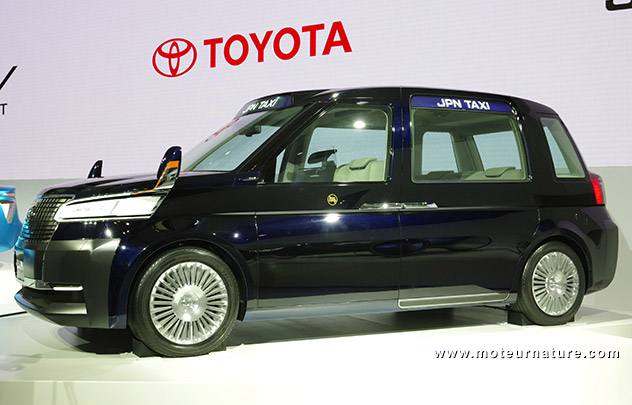 It’s a bit of a paradox that Japan is a high tech country but it still has many taxis using Toyota Crown Comfort cars, a car which looks like it dates from the 80’s (and somehow, it does). This is a modern interpretation. It has an enlarged rear compartment, it’s a hybrid and it runs on LPG to please Japanese taxi drivers which are used to this fuel. It’s a concept, though, and nobody yet is quite sure if it will evolve into a production model. 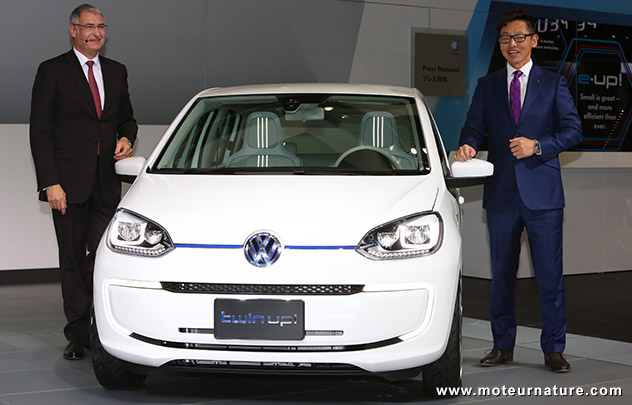 The super efficient XL1 is the most expensive Volkswagen while the little up! is the cheapest. This concept takes the drivetrain from the first to put it into the body of the second. Performances figures are poor while the price wouldn’t if it were produced. The opposite would have been more fun. Especially with a turbo added to the up’ inline-three 1-liter engine. 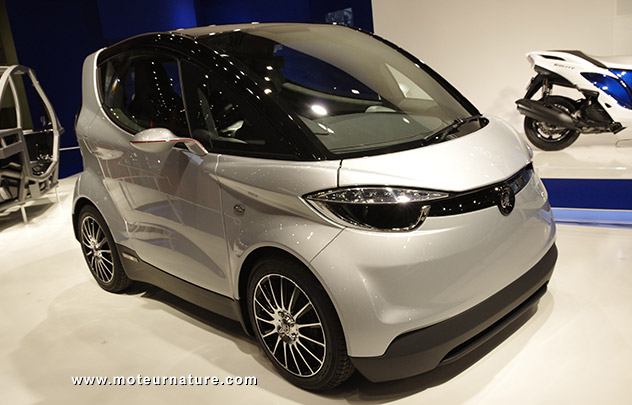 One of the surprise of the show. This is the result of a partnership between Yamaha and Gordon Murray design which brought Yamaha its iStream production technology and organization. For low volume production, this process would make this MOTIVe vehicle cheaper to build than the equivalent Smart Fortwo, but will Yamaha do it? The question remains open.