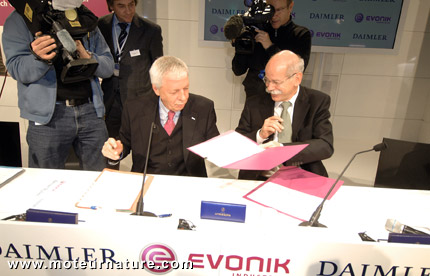 Our illustration is an old one. That was five years ago, when Daimler signed a deal with Evonik, a speciality chemicals company, to create a joint-venture which would manufacture batteries for electric cars. The resulting company was Li-Tec, which is today building batteries for the little Smart electric car. It’s a business that calls for large investments, with little return as volumes remain low. Because of this or some other unknown reason, Evonik announced it was looking for a buyer for all its shares in Li-Tec.

It’s a rare and interesting opportunity as Daimler remains engaged. The next generation of the Smart will use again a Li-Tec battery. So whoever takes over will instantly become Daimler’s partner, and see its products in a Daimler automobile. The most likely candidates are from Asia, they would gain European facilities.