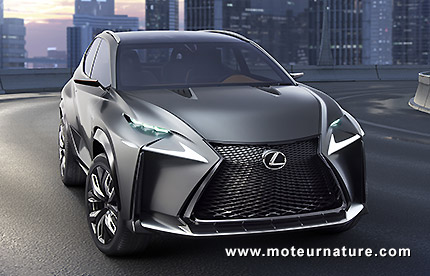 The Lexus LF-NX concept was unveiled two months ago at the Frankfurt motor show with a hybrid powertrain. It will be unveiled at the Tokyo motor show with an all new engine, with a new architecture, one which would be right at home under the hood of a modern German car: a downsized turbocharged engine. Lexus cars used to have V6 or V8 engine, but here’s come a 2-liter in-line four. Quite an event considering the last turbocharged car from the Toyota group was the Supra, nearly 15 years ago.

Toyota was turbocharging engines to gain more power back then, it will do so to make cars more efficient today. A turbocharged 2-liter can replace a 3-liter atmospheric engine, and this is what it’ll do. BMW, Audi and Ford have already shown the way, Lexus will follow them. The production LF-NX is expected next year, hopefully with a toned down design, and it will get a turbocharged engine.