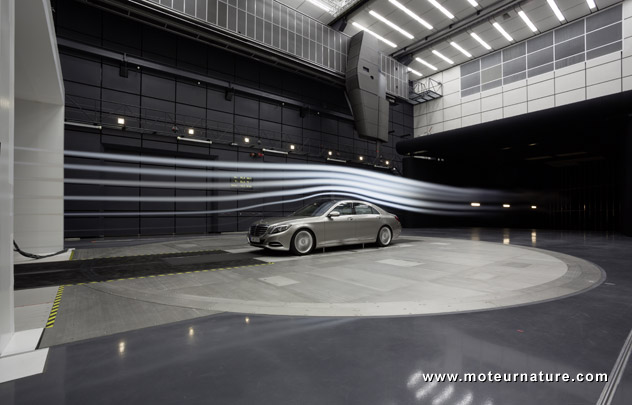 The Frankfurt motor show is about the cars, but we’re going there with a thought for the industrial processes and the lengthy developments which made them real. Mercedes has just moved one step further in that game, with a new tool which should give him an advantage over most of the competition.

It’s an aeroacoustic wind tunnel which can produce winds up to 165 mph, but that’s not its most incredible feature. That one is its very low operating noise. This wind tunnel is nearly silent at 87 mph. This will allow the most acute study of all aerodynamic noises to make Mercedes cars the most silent possible. The manufacturer adds that its wind tunnel is the best in the world. Observers with a sharp eye may also note that the car sits on a turntable. With a diameter of twelve meters, a bus could also fit there, while it will also enables the study of crosswinds for all vehicles.

That didn’t come cheap, and Mercedes has invested $305 million in this project, but the company intends to keep its leadership position. The German company is the manufacturer of the world’s most aerodynamic car, the Mercedes CLA, and newer models should get even better, for better performance, and lower fuel consumption.