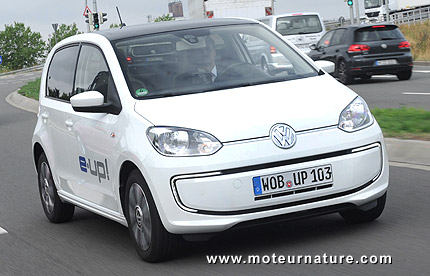 All the world knows that the most fuel-efficient car is the Volkswagen XL1. But the German plug-in hybrid wonder is a very expensive car (€111,000), it’s not available anywhere but in Germany, and only 250 cars will be made. So what’s the most fuel-efficient car with a normal price, and unlimited availability? The answer’s again from Volkswagen, that is the little e-up!. The electric car just had its first public showing at the Frankfurt motor show, and official European testing says it can cover 100 km with 11.7-kWh. That’s about 188 Wh/mile, and no other production car can beat that.

Compared to gasoline, that’s equivalent to 145 mpg. The Volkswagen e-Golf is also excellent at 204 Wh/mile in official testing. The cars may not deliver numbers as high in the real world, but even if they’re 20% off, that’s still good, and better than the competition (Renault Zoe or Nissan Leaf).