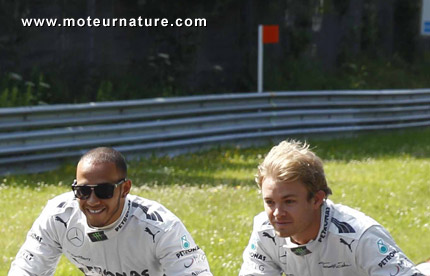 Lewis Hamilton is the 2008 Formula One World Champion, and he has 21 Formula One races so far. His partner, Nico Rosberg, is also a great champion, both men are driving for the Mercedes racing team in Formula One this year. They also happen to drive together other vehicles, and that was the case a few days ago, at the mighty Nurburgring race track. They drove four-wheel electric vehicles, but hmm… Those were not really cars. It’s called the Smart Electric Board, and it’s not very fast, but it’s zero emission. See it for yourself in the video below.