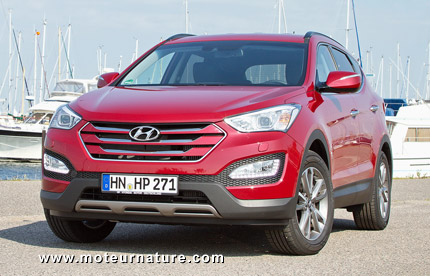 The third generation Hyundai Santa Fe was launched last year, but it wasn’t entirely new. It came with the same engines as the previous one. Here’s the new one, a 2-liter turbo-diesel, good for 150 hp and 282 lb-ft of torque, constant between 1800 and 2500 RPM. The best thing about it is that this new engine meets the future Euro 6 emissions regulation. So it’s very clean, compliant everywhere, and it’s an achievement because it doing it without resorting to any new or special tech.

Just like a small car in fact, and this is new. Most engineers had the belief that the larger the vehicle (the Sante Fe is not a small car), the bigger the engine, the trickier the exhaust gas treatment had to be, but this isn’t the case here. This engine has a common rail fuel injection system, a variable-geometry turbocharger, a cooled low pressure EGR system, this is all standard stuff. Most diesel cars already have that today, only to be compliant with the Euro 5 regulations. This Hyundai is using the same tech to achieve Euro 6 compliance, without the need of an expensive SCR system, and many others will soon follow this example. Looking further, the idea that stricter emissions regulations would kill the diesel engine is just plain wrong.