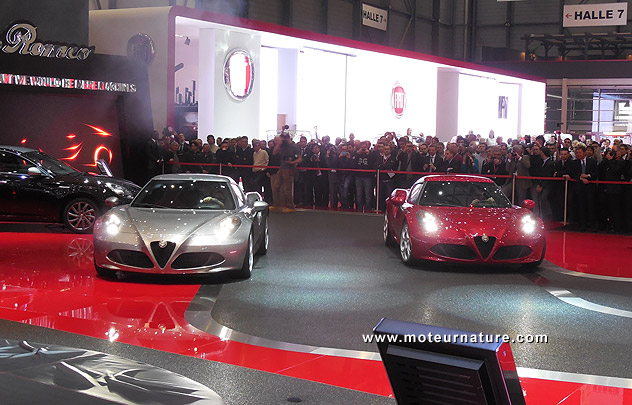 There were some really mighty supercars unveiled in Geneva. The new Ferrari, the new McLaren, cars that can do more than 200 mph and cost more than a million. Close to them, it was refreshing to discover the Alfa Romeo 4C. It’s a bit smaller than a Porsche Cayman, and it should sell in the same price range. Alfa Romeo said at the show that the Launch Edition will sell for less than €60,000 with VAT included. Not exactly cheap, but very affordable considering the technology: this 4C is the cheapest car on the market with a carbon fiber shell. This shell is precisely what makes this car so great, and a true sports car. Much lighter than steel or even aluminium, carbon-fiber gives the Alfa Romeo 4C a low weight of 1973 pounds! The world hadn’t seen a regular production sports car this light for nearly 40 years. 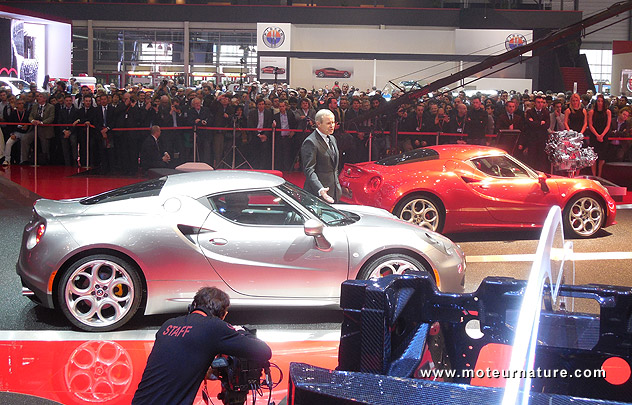 It’s as promised with the concept two years ago, and maybe even better in our eyes. Alfa Romeo will begin building 1,000 of them as Launch Edition models this year, and it should build up to 4,000 of them starting from next year. It’s weight that sets the 4C apart from the competition, and the choice of a lighter shell allowed the engineers to follow that same road with a small 4-cylinder engine. Displacement is a modest 1750 cc. That’s less than a Toyota Prius, which has a 1.8-liter gas engine. But thanks to a lot of engineering, this little engine delivers no less than 240 hp. Torque is 258 lb-ft and Alfa Romeo adds that 80% of it is available from 1700 RPM.

Turbocharging, direct fuel injection, and variable valve timing on both sides all contribute to make so much power from so little displacement, but the advantage of small displacement should remain on part throttle. The Alfa Romeo 4C will probably get more than 40 mpg on the highway. On such an exciting sports car, that is green!