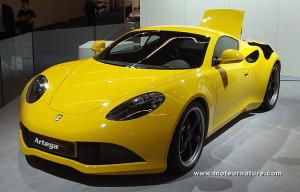 It’s not easy to start a new car company, and little Artega Motors will be another proof of that. The company introduced its superb sports car at the Frankfurt motor show in 2007. Designed by Henrik Fisker, its a breath-taking automobile, which started its career with a 300-hp Volkswagen V6. In Geneva last year, the company unveiled to great acclaim (I know, I was among those acclaiming!) an electric version with the help of Brusa parts.

It will probably never be built. The company built a few hundreds gas sports cars, and at least 2 electric models but it had no other choice than to file for insolvency last week. An Asian investor was supposed to bring new capital and take the company to new heights, but he won’t come. The company lacks the capital to complete development of its new electric sports car, while sales of the gas model were not high enough to keep the business afloat. It’s a sad ending for a promising car. The electric Artega was bringing the promise of a sports car much faster, and much more stylish than the Tesla roadster, which is now out of production. Let’s hope they will find a new investor. The high-end electric sports market may not be large, but it exists.

Video below was shot at last year’s Frankfurt motor show.

One thought on “Who will save the beautiful electric Artega sports car?”