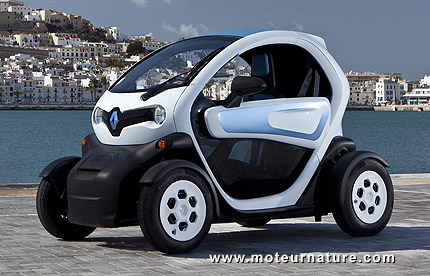 There were 2271 electric cars sold in France in the first 6 months of the year. But that number doesn’t give an accurate picture of the market, because 1383 cars went to the Parisian Autolib car-sharing service. So the real French market is only 888 cars big. That is larger than the British market, with only 559 electric cars sold in 6 months, while 1419 were sold in Germany, and 202 in Spain. The poor sales in the UK are particularly disturbing, as this is the most generous country for EV buyers. The British plug-in car grant takes £5,000 (~$7,745) off the price of a Nissan Leaf. Substantial, but obviously not enough… On the other hand, the 1419 Germans who bought an electric car didn’t get any kind of incentive.

The above numbers are for passenger cars. The Renault Kangoo ZE, a compact van, is a utility which doesn’t show up in them, but it has been quite successful. 1,058 were sold in France this past semester. But the most successful EV by far is not a car, it’s the much smaller Renault Twizy. 1,551 were sold in France alone, and more than 6,500 have been sold in Europe. Nobody’s buying one to replace a car. It’s more of a second, or a third vehicle for short errands. Few people believed in it when it was launched, but it seems there was a new market for electric mobility between the traditional car and motorbike markets.

Video below shows people partying with Twizys in Paris.