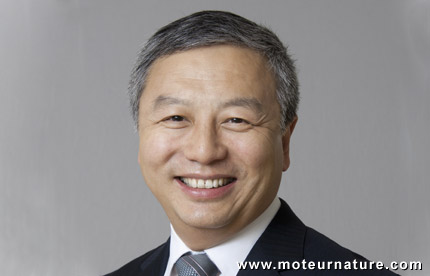 Our picture shows a jovial man. His name is Kai Johan Jiang, a Chinese man from Hong Kong. He’s the founder/manager and main shareholder of Modern National Energy Holdings Ltd, a Chinese company which is the main shareholder of National Electric Vehicle Sweden AB (NEVS), a new Swedish company which is the new owner of Saab Automobile AB, the Swedish carmaker. NEVS will start a totally new business, it will not deal with the supply of parts to old Saab owners. Another company has this task. NEVS will have a different activity, totally dedicated to electric mobility.

That is new to Saab, which has never sold an electric car before, and it’s also new to the new manager, who has no experience at all in car manufacturing. Then he doesn’t have any rights to Saab’s newest models, the 9-4 and 9-5. Those cars used platforms licensed from GM which were not part of the deal. Mr Kai Johan Jiang only owns rights to the 9-3 platform, and a new chassis which Saab was working on, known as Phoenix, but nobody how advanced it is. So for now, the only plan is to launch a new product based on the old 9-3 platform. That one was unveiled with the Opel Vectra at the Geneva motor show in March 2002. It was pretty good by then, but it’s getting old now. Worse than that, it was not designed to accommodate a large and heavy battery pack.

We may be confident that engineers will find solutions to all problems, but we can’t expect the resulting car to be as sharp as it could have been if they had started with a clean sheet of paper. We may also take notice of Sweden’s social model, with high wages and high taxes on businesses. This is not the place for low-cost manufacturing. Yet, there’s a new carmaker that won’t build anything but EVs, so those are good news. National Electric Vehicle Sweden is expected to unveil its first model within 18 months.