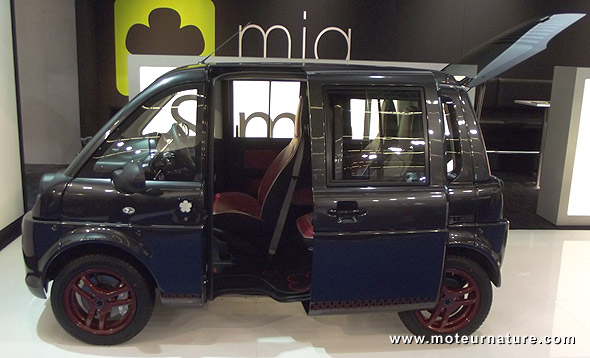 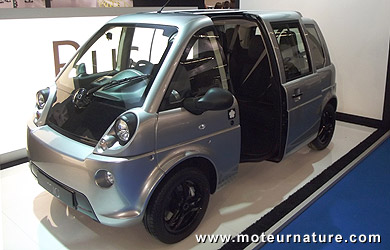 It’s easy to make a list of French electric cars. The Citroën C-Zero and Peugeot Ion come to mind first, but they were designed in Japan and that’s where they’re built, so we can’t count them on our list. Same story with the Renault Fluence Z.E. which is built in Turkey but the electric Renault Kangoo is made in the North of France, in Maubeuge. Too bad you can’t buy it complete, because Renault doesn’t sell the batteries: there is no other choice but to rent them. Cars from Venturi at last are sold with their batteries, but they’re very expensive. The Simplycity from Eco & Mobilité is not, but it’s so basic there are few buyers for it, and the company went into administration in September. That leaves the little Mia electric as the one and only French electric car currently in production, and available to anyone at an affordable price. It’s a 3-seater (the driver sits alone in front) built in Cerizay, in western France. You may remember it as the Heuliez Friendly, since that was its name when it was unveiled. 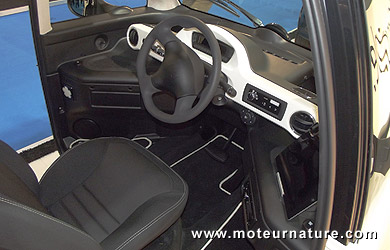 With Heuliez, the contract manufacturing company, now belonging to history, the car is called the Mia, built by the Mia Electric company, in France, with German financial backing. The Mia remains what it has always be, a small and unpretentious little automobile. It’s small everywhere with minimal energy consumption, and it doesn’t take much space on the road either. The Mia is never greedy yet it offers a lot. Only a limo offers as much legroom for rear passengers, and elbow room for the driver is unmatched by any car. The only drawback of this triangle configuration is that if the driver wants to talk to his passengers, he won’t be able to see them. You’ll also need some time to get used to the central driving position, but it quickly feels great while at the same time leaving a lot of space for wheel arches. The Mia’s turning radius is the shortest on the market, and the car’s so light, that it doesn’t require any power assistance for the steering. 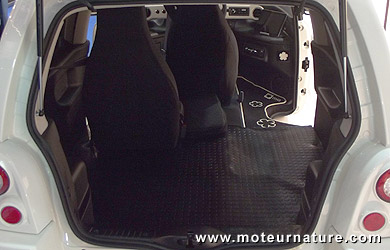 The standard Mia seats 3 people, but there’s also an utility version, paneled and without any rear seats (or only one as shown on our picture). It provides up to 53 cu. ft. of storage space. Nothing but excellent for a car only 126 inches long! And that is the long wheelbase version. Standard 3-seater model is 113 inches long, and 65 inches wide. That will enable the Mia to get into the tightest places with ease, without any noise nor emission of course. It’s not fast, there’s only 25-hp and 43-lb/ft of torque available, but the Mia is not intended to leave the city. Everybody will appreciate its short recharging time. 3 hours with the standard 8-kWh lithium-iron-phosphate battery, giving a 50-mile range, and 5 hours with the optional 12 kWh pack that allows a 75 miles of autonomy. With a 2-year warranty (3-year for the battery), the Mia retails for just under $27K in France. Not exactly cheap, but that’s the price of low volume production in western Europe.

Short video below, the Mia électrique at the Frankfurt Motor Show.

One thought on “The Mia electric, the little French electric car is on sale today”