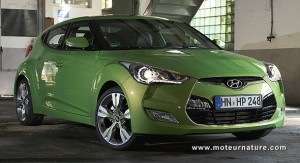 The Veloster 3-door sedan has just arrived in showrooms across the country, but Hyundai already talks about the engine it will get next year. The good news is that it will have more power, and there shouldn’t be bad news as this new engine shouldn’t need much thirstier than the actual one. There’s an explanation for this: both engines have the same displacement of 1.6-liter. The big difference is that the new engine is turbocharged, but it’s much more than the standard engine quickly fitted with a turbo. Everything has been reengineered and it shows with power going up to 204-hp from 138. The torque improvement is even more impressive with 197-lb.-ft. at 1,750 rpm instead of 123 lb.-ft. at 4,850 rpm. This explains why the more powerful engine shouldn’t have worse fuel consumption. With more torque down low, the driver will be able to upshift sooner than in the standard Veloster.

The turbocharger is air-cooled, it’s a twin-scroll meaning that it’s a single turbo, yet somehow it functions as 2 turbos. We shall also note that it’s fully integrated into the exhaust manifold. We expect to see it in the Veloster sometimes next Spring.

The second new engine is a 2-liter diesel, giving 150-hp and 285-lb.-ft. It should be the most popular engine for next year’s Santa Fe in Europe. This third generation Santa Fe shall be unveiled in Geneva next year, its strongest point being that it will respect the Euro 6 regulation. This is an emissions regulation, a bit like SULEV (Super Ultra Low Emission Vehicle) in the U.S. which will become mandatory in 2015. The Hyundai’s diesel will respect it 3 years ahead of its implementation. Smart move from the Korean manufacturer.