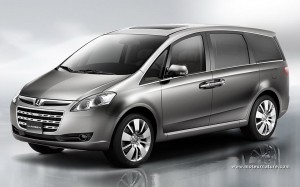 There are more than 10 car manufacturers producing each more than 100,000 cars per year in China. There’s even more with less volume, and here comes another new chinese manufacturer: Luxgen. Well, actually this company is not really chinese, as it’s not from China’s mainland. Luxgen is from Taiwan. And a taiwanese car manufacturer is something new, never seen before, and so are the cars. When so many chinese cars looking like old european or japanese models, the cars from Luxgen are pretty original, clean-sheet design. There’s two of them. The first one (left picture) is the MPV, it was introduced last year, and here comes the SUV (right picture). These are not small vehicles. The SUV is very close in size to a Ford Edge, which is a bit surprising for a new manufacturer. Most chinese manufacturers got started with small low-key cars, Luxgen starts big. 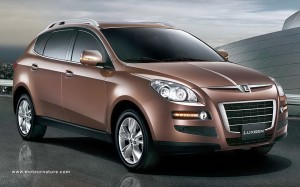 Actually, the name says it all. It’s the contraction of luxury and genious. Both the MPV and the SUV have a long list of standard equipment, in the second one, I noticed an intelligent power actuated tailgate, or an anti-theft driver’s seat that will activate by sliding itself forward and leaning against the steering wheel, to deny unauthorized access of the vehicle when locked.

Coming from Taiwan, a country that got its fame from electronics, the Luxgen has a Think+ on board computer system, with hands-free phone, a high end audio system, and GPS navigation. But I’d rather have a look under the hood. Engine is a turbocharged gasoline inline-four of 2.2-liter displacement. Power is a modest 175-hp, with 206-lbs/ft of torque. This is not a pure chinese engine, french engineers (LMM) helped designing it, the gearbox being japanese, coming from Aisin. Nothing exciting, but wait, there will be an electric version.

This is the most interesting one. Like the gasoline model, it has not been developed by taiwanese engineers. Since they’re a new manufacturer, they asked for help, and they went for the best in the business: AC Propulsion. To introduce this company, let’s say that without it, the Tesla roadster would not exist. Nor the electric Mini and many other electric cars. In this Luxgen MPV, the electric drivetrain from AC Propulsion is rated at 180-kW (245-hp), with 195–lbs/ft of torque. This allows that pretty big vehicle to accelerate to 60-mph in 8.6-seconds. Top speed is 90-mph, while the range is 217-miles at a steady and constant 25-mph, thanks to a lithium-ion battery pack.

The big question is about the price. Taiwanese companies are the best in the world for great electronics at a good price. Just have a look at Acer or Asus computers. Could they be as good in electric cars? We don’t have the answer yet.

The gasoline Luxgen MPV is already on sale in Taiwan and in the Middle East, the SUV will follow within days, its next export markets are in Southern America.