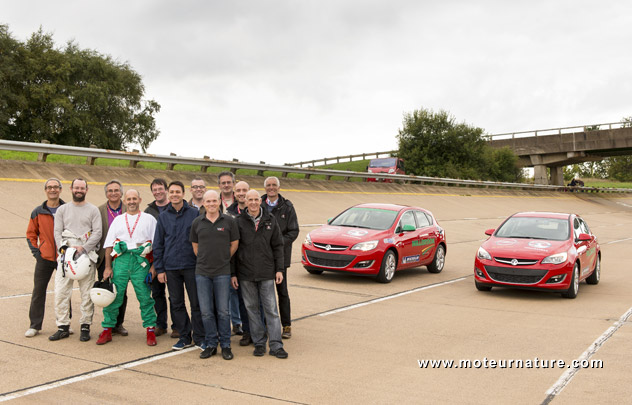 Quite regularly, there are electric car drivers trying to make records. They lay out a very precise road map, where all recharges will be planned and timed, with a sharp schedule and a set speed to maintain between each stop. It’s a great organization, but it only shows the huge gap there is between EVs and ICE cars.

A British team has just realized an endurance test, driving as fast as they could on a race track for 24 hours. They did 2982 miles in a single day. Average speed was a nice 124 mph with cars which were totally stock (save for some extra safety equipment like harnesses), and which were not expensive, out of the ordinary models. The two cars used were Opel Astra. Americans may not know this model, but they may know the Buick Verano which uses the Astra as its base. This is a compact sedan, an affordable family car. The version used here was the one with the 2-liter diesel engine. It didn’t need a drop of oil covering that distance, and the two cars drove flawlessly.

Only 22 minutes were needed for fuel refills, tire pressure checks and driver exchanges. So that’s 23 hours and 38 minutes of driving at 124 mph out of 24 hours. Anyone to better that? The diesel engine could still be improved to reduce its most harmful emissions (already hugely reduced from what they were), but when it comes to drive long distances, it’s the technology to beat.