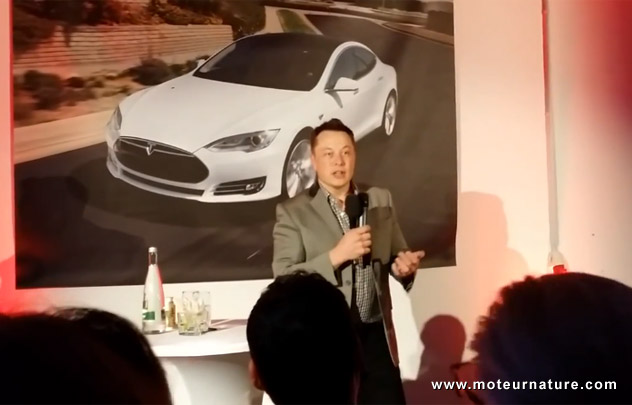 Talking at a Tesla event in Munich, Elon Musk, CEO of Tesla Motors, surprised everyone by saying he would soon launch a free optional high speed tuning for the Model S. He also said the tuning would be available as a retrofit, and still free. Sounds great, but what can that tuning turn out to be? Musk didn’t give any further details, only that his goal was to make it really great at top speed.

We guess the changes would be software only, as they wouldn’t be free otherwise. So top speed shouldn’t get any higher. That would require a gearing change. Smoothness maybe can be improved. I sadly lack any experience of driving a Model S at its top speed, but some gas cars with speed limiters are really brutal at their top end. Say, if the limiter is set at 130 mph, the car accelerates strong up to 129 mph, and then it feels like you’ve hit the brake when the car reaches 130 mph. The software controlling the suspension settings could also be optimized to make the car more stable at high speed. The German cars are so good doing that. A high end German sedan just cruises at 140 mph. Nothing gives any sign of stress, everything’s peaceful.

The on-board computer and the cooling system may also be revised, not to see high power demand as abnormal. There could be many more little things, the most important being that Elon Musk cares about its German customers. He knows that this is a demanding market, and he may remember there was a problem at a press event with a roadster a few years back. A German journalist took a roadster to the autobahn, pedal to the metal, and a few minutes later, there was smoke coming out from the back, scaring him. Those things do not happen in America, but they do in Germany. And local manufacturers have always sold the high speed potential of their cars as a strong asset.

With a 134 mph top speed, the Tesla Model S clearly isn’t in the same league. The best Volkswagen Golf diesel is faster, but a bit of a autobahn-rated flavor cannot hurt!