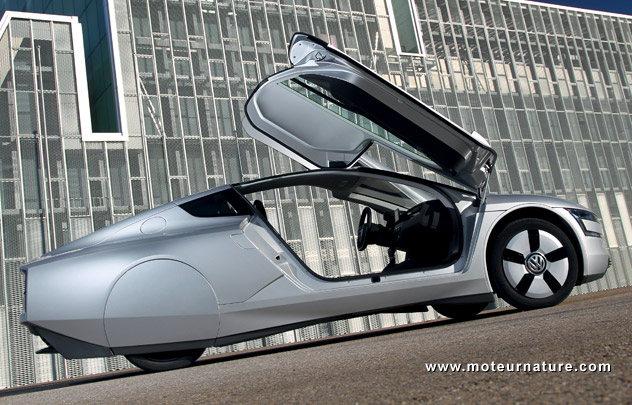 This is the car every greenie’s dreaming about. The Volkswagen XL1 is the most aerodynamic, it’s the lightest, the most fuel-efficient car on the planet. The 235 mpg car. We could go on with superlatives, but we must add its high tech comes at a price.

The XL1 is just so incredible. Compared to a Renault Zoe, the XL1 is 1,482 lb lighter! Compared to a Lamborghini Aventador, which has nearly identical doors, the little Volkswagen is nearly one ton lighter. Because of all the high tech stuff, and low volume production (only 250 cars are planned), the Volkswagen XL1 will cost €111,000 ($146,000, source: Wirtschafts Woche). Very serious money. We wrote earlier the XL1’s price would be between the Golf and the Audi R8, but we were wrong when we hoped it would be closer to the Golf. The XL1 is the world’s first eco-supercar, and it comes with supercar pricing.

Traditional green car buyers will not be able to afford it, and we may doubt Ferrari and Porsche customers will be interested by its mediocre performance, so who will buy it? Volkswagen’s probably right to plan a run of only 250 cars. It won’t find many more takers. Customers may place their order at the Frankfurt motor show next week.