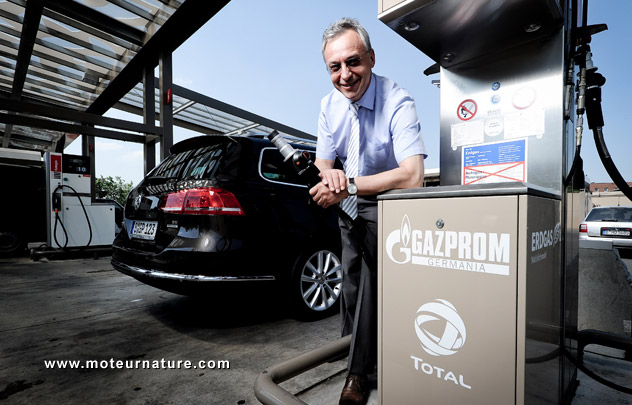 Gazprom, the Russian Natural Gas giant has been thinking for many years about launching a network of NG stations in Europe. Today, it’s getting real. Gazprom already had eight stations, it has just bought twelve more from FGN, the Bavarian utility. Three more are already planned to open in the coming weeks, making a total of 23 stations before the end of this year.

Furthermore, thanks to fast growth, the market will reach an important step very soon. There are 97,000 NG vehicles driving in Germany today. There will be 100,000 soon, and a market of 100,000 customers can’t be ignored. Gazprom is well placed to satisfy all these people. A driver filling his tank at a Gazprom station will buy direct from the producer, without any middleman taking a cut. The stations sell compressed (CNG), and some also sell liquid natural gas (LNG), which has a higher energy density. It’s only truck drivers who require LNG, and there are very few LNG trucks around, but this should grow in the future, as a greener alternative to diesel fuel.

Gazprom’s also known for its sponsoring of the Volkswagen Scirocco R-Cup, a race car running on CNG. So, the leader in Russia, Gazprom should also become a leader among German drivers