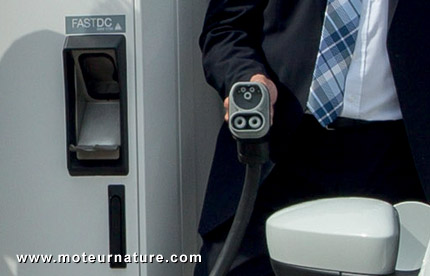 The new Combined Charging System (CCS or Combo) plug, which was announced last year with much fanfare at the EVS26, had got many people talking since its unveiling, but the world was still waiting to see it on the street. Not any longer. The first CCS public charging station just opened on Braunschweiger Straße in Wolfsburg, Germany. Wolfsburg is the hometown of Volkswagen and it was the car manufacturer opening the station with several E-Up models, its upcoming electric car, the first production EV from Volkswagen.

The charger was from ABB, and the event took place on a nice sunny day. Everything was fine up to the moment where we learned about the power provided. At the lab, the CCS plug has been designed to handle up to 170 kW DC charging. The general idea was that to keep a safety margin, street applications would get half of that, 85 kW. It’s just like Chademo, which was originally designed for 100 kW current, but only gives 50 kW at stations. So it was a huge disappointment to learn that this new CCS charger only puts out a 50 kW current (DC). It’s no better than Chademo!

It’s a shame and more than that, a waste of money. There are already hundreds of Chademo chargers in Europe, which work fine, and everybody wonders what’s the point of creating a new standard if it’s not any faster than the existing one? Renault’s doing it better when it launched AC 43 kW charging for its Zoe model. It’s a bit slower than Chademo, but thanks to the choice of AC, the chargers are only a quarter of the price of a DC Chademo unit. There won’t be any price advantage for CCS chargers over Chademo ones.

So let’s hope these first CCS chargers will be followed by faster ones. The plug has been designed to handle much stronger currents, and Europe doesn’t want to see Tesla leading by such a huge margin with its 120 kW superchargers. Or could it be that it doesn’t mind?