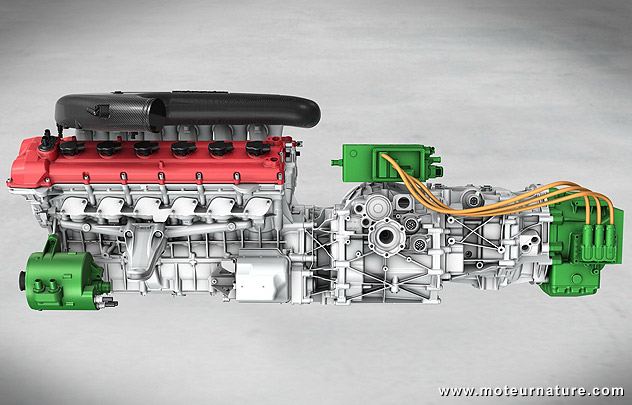 At the Beijing motor show, on the Ferrari stand, the star was the new F12 berlinetta, but there was another unexpected highlight. It was under a glass box, the prototype of a future hybrid powertrain. It has a V12, a big engine, but it’s advertised as the most fuel-efficient Ferrari ever thanks to the second generation HyKers system. It shall also be the fastest ever, because it will be used in the upcoming successor to the mythical Enzo.

This car will have its engine mounted in a rear-mid position, with a 7-speed dual-clutch transmission behind it and the electric all the way in the back. There’s another small electric motor in the front, to run the accessories when the V12 isn’t running. In the official video below, Ferrari says fuel economy will improve by 40%, which is nothing but incredible. Sad also, because it implies that the V12 will often be shut. That is not a drama in a Prius. The driver of a Prius is happy when its gas engine stops running, whereas a Ferrari driver wants to enjoy the feel and the music of its V12 engine at all times. Ferrari should know that…

Some journalists already announce some astonishing figures, such as the 0-to-200-kph (124-mph) acceleration 3 seconds faster with the hybrid system, but that is very hard to believe, considering the astonishing numbers a modern Ferrari can achieve. The F12 berlinetta does the 0 to 124-mph warm-up exercise in 8.5 seconds. Nobody can reasonably expect a future model to get to that same speed in only 5.5 seconds. Assuming the hybrid system only adds 100 kg, the complete car would be at least 1500 kg (3300 lbs), and it would need much more than 1,000 hp to accelerate this fast. Dragsters have much more power.

Whatever the outcomes, this future Ferrari hybrid is a much intriguing piece of machinery. We’ll discover it next year, probably with a lithium battery from SB LiMotive.