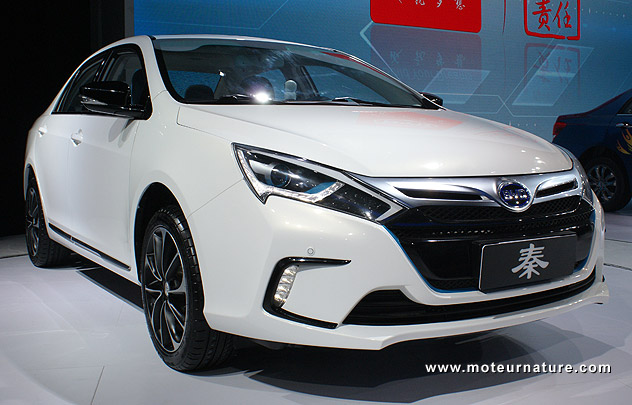 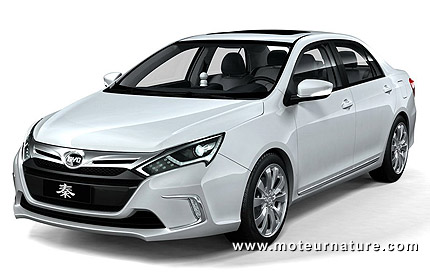 The BYD Qin is a plug-in hybrid that was unveiled at the Beijing motor show. It’s officially a concept-car, but it was standing next to the new F3 sedan, which is a regular production model. That new car looks much more original than the old one, which was a Toyota Corolla clone (in the truest sense of the word, some body parts were interchangeable). This new car is 187 inches long and 69 inches wide, so it’s bigger than a Corolla now, but it’s mostly due to larger overhangs. The one big thing where BYD stood apart was with its innovative plug-in hybrid drivetrain in the F3 DM. BYD continues on this path with this Qin concept.

Compared to the base F3 model, it has a wider mouth, different front and rear lights, and compared to the old F3 DM, it has a totally new plug-in hybrid drivetrain. The gas engine now makes 154-hp, and it works hand in hand with a 110-kW electric motor. Total torque available is 325 lb-ft. 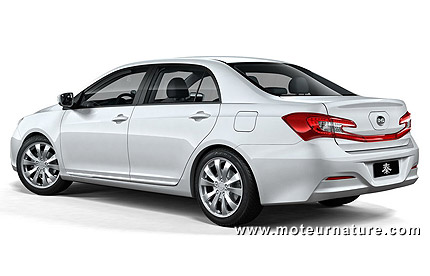 Accelerating from 0 to 62-mph requires less than 7 seconds, while BYD says fuel economy is 117 mpg in hybrid mode. Very impressive values, and much better than the previous F3 DM. Though surprisingly, BYD puts less emphasis on the car’s abilities on electric mode. Range, running on battery power, has actually decreased. It’s down to 50-km (31 miles) because of a much smaller battery. The F3 DM had a 16-kWh unit, whereas this Qin project only has a 10-kWh pack. On a positive side, this battery makes only half the weight of the previous one, so there’s no doubt this concept is very exciting. But the biggest question remains unanswered.

I’ve seen the BYD F3 DM at the Geneva motor show in 2010, where I had been told it would launch in Europe the following year, but nothing happened. BYD also said it would sell its cars in the US, but it hadn’t started yet. Even in China, the plug-in hybrid version of the F3 is a rare sight. Only a few hundreds have been sold, and none to a private customer. We may also question the car true potential, considering no journalist has ever done an instrumented test of the F3 DM. Will this Qin concept have a better fate?