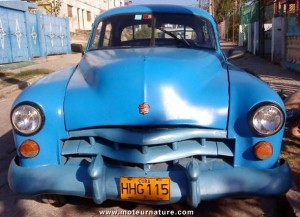 Cuba’s dictatorial government has just granted a new freedom to his subjects: the right to buy and sell any kind of automobile. That right was previously limited to cars built before the 1959 revolution. It’s one of the reasons that made Cuba’s streets crowded with old derelict American cars. Our picture shows a Cadillac, or more precisely what’s left of it. Most chrome parts are gone, the ones still on the car painted. Turn signals appear to come from a Fiat, and we’re unsure about rear view mirrors. Though we note they’re of multiple origin, since the left is different from the right. Maybe it’s fashionable in Cuba.

The worst is probably under the hood, where the original engine has been replaced with a Perkins Balkancar truck engine. Don’t look for any kind of smog control in it. Cuban cars are the most polluting in the world, and this is not about to change.

The freedom to buy and sell has only been granted to cars already in the island. Buying a new car remains very difficult. Few people besides government officials are able to do so. Some Cubans who have been working outside the country were allowed to bring back a car, but that didn’t make many of them. Cubans will now be free to trade Russians cars (Lada or Moskvich) from the 80’s, cars that Russians would be ashamed of driving now that their market has been flooded with cheap imports from Germany.

We wish Cuban’s government showed some concern about the environment. How about cars with catalytic converters for a cleaner air? How about hybrids and newer models for lower fuel consumption, and less CO2 emissions? These are important questions a responsible government should care about.

Note: the car pictured above is for sale here. It would sell for much less money in the US.