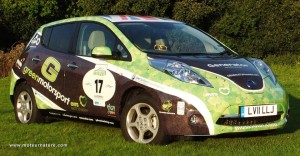 The cars, all electrics, will leave Paris on Sunday at noon, heading North, to Lille. Then Belgium, the Netherlands, Germany, Switzerland, Liechtenstein, Austria and finally the Czech Republic, where their arrival is scheduled in Prague, on September the 25th. That’s about 2,000 mile of driving, going at a daily 155-mile (250-km). A pit stop is scheduled at half the distance everyday, but some cars, like the Tesla roadster from one participant, should not need it. Other cars include a Nissan Leaf with a really wild paint job. A British team will drive it, proudly showing the Union Jack on the roof, though the car doesn’t deserve it yet. Nissan has already announced it will build the Leaf in Britain, but production won’t start before 2012.

More interesting, a Skoda Superb that has been converted to an electric drive (right picture). Unknown in America, Skoda cars are some kind of Czech Volvo. They are not sexy, but very dependable cars. The Superb is Skoda’s flagship. It’s Camry-sized but this prototype wasn’t built with any production-intent. Another gas car converted to electricity is an old Audi A2, a Suzuki Splash, and a couple of Chinese cars. Regular production models include 2 Tesla roadsters, one Smart, 2 Citroen C-Zero, a Think, and some lighter neighborhood EVs.

The race organizer is Louis Palmer, the Swiss electric car champion who built and famously drove a solar taxi all over the world. He’s once again promoting electric mobility with this Wave Paris-Prague rally, his goal is to move the world.

One thought on “More than 20 electric cars on a rally in Europe, it’s a Wave to move the world”