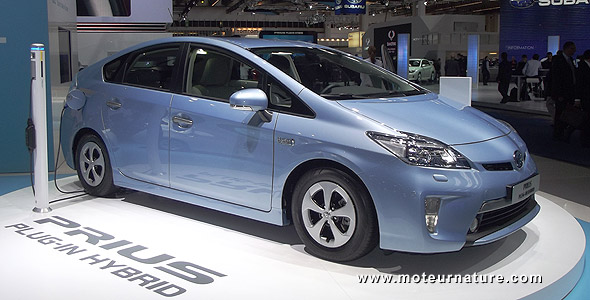 The plug-in Prius was unveiled in its production version at the Frankfurt motor show, but Toyota didn’t revealed its price there. Would it be 10% more than the standard version? 15% more? In the US, where the base Prius sells for $24,280, the plug-in one will retail for $32,760. 33% more! Actually, that huge difference is not entirely due to the bigger battery.

The plug-in Prius has more standard equipment, like heated front seats, and specific content like unique wheels. We may estimate that the additional cost of the 4.4-kWh lithium-ion battery with its charger is around $4,500 and that is quite a lot, because the range allowed by this small battery is only 15 miles. Preliminary figure was only 13 miles, but that proved to be conservative, so Toyota now says 15 miles, at speeds up to 62-mph. This may indicate a difference with European models, because in Frankfurt, official Toyota data was 23-km at 85-kph (14 miles at 53-mph).

Whatever the facts, there’s no denying that the plug-in Prius is more expensive than many people had expected. Of course, it’s much cheaper than a Chevy Volt, but the American sedan has 3 times the range of the Toyota on battery power. Worse, that short 15-mile range might not prove enough of an incentive to plug. Not that it’s a chore to plug the car in the garage every night, but the financial gain from doing it is just so little money. A Prius requires less than a third of a gallon to drive 15 miles. Plug and save a buck? Many people would just not bother.

One thought on “Europe’s still waiting, but Toyota has priced its plug-in Prius in the US, is it worth its price?”