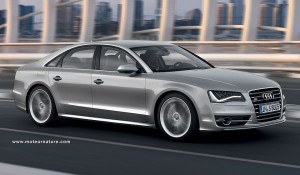 Past versions of the sportiest sedans from Audi had a screaming Lamborghini V10 engine. A very impressive and great sounding power unit, but also a thirsty one. This had to change, and Audi ‘s just about to do that. The 5.2-liter V10 will be replaced with a twin-turbocharged 4.0-liter V8. An all new engine, which will come in two versions. The first one, for the S6 (right picture) and S7, will pump out 420-hp, with 406-lb/ft of torque. Most impressive is that with super smart engine controls, peak torque is constant from 1400 to 5300 rpm. The transmission is a 7-speed twin-clutch automatic, giving strong acceleration, with the car reaching 62-mph in 4.8 seconds. Top speed is electronically limited at 155-mph, and a lot of work has been done to make the big car fuel-efficient, with a Stop & Start system, a smart alternator and a cylinder-deactivation (under partial load) system all fitted as standard. The result is a 24-mpg rating (combined), which sounds great for a 420-hp all-wheel drive luxury sedan. 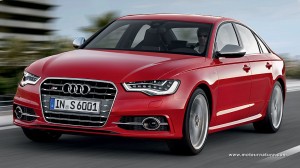 A larger car, the S8 (left picture) will get even more power. 520-hp, with torque up to 479-lb/ft, constant between 1700 and 5500-rpm. That sounds more like an electric motor… The transmission is a conventional automatic this time, with a torque converter, and no less than 8-speed. Acceleration 0 to 62-mph is a 4.2-seconds affair, and the S8 gets a 22-mpg rating (combined). That is quite extraordinary for a non-hybrid limousine of this caliber. We will discover those S-badged Audi at the Frankfurt motor show, where we may also expect a third, more powerful version of the V8 twin-turbo, this time under the hood of a Bentley. Stay tuned.

One thought on “Downsizing the upper-class, a turbocharged V8 to replace a V10 in the Audi S6, S7 and S8”