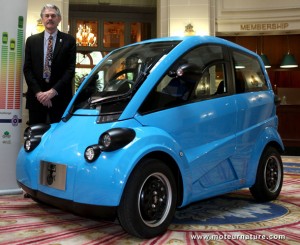 It was announced in late 2009, an electric version of the car the T25, the very small car that plans to be the market’s most efficient. Its name is T27, it has been unveiled yesterday in London, at a Royal Automobile Club (RAC) event. Only 2.50 meter long, it’s quite logical to compare it to a Smart Fortwo, but it’s undeniably better as it manages to be shorter, yet more user-friendly as it’s a 3-seater.

More than that, the T27 from Gordon Murray is also much more efficient than the electric Smart, but it’s quite easy to understand why, as it’s about 600 pounds lighter. The motor is a small 25-kWh unit, from British specialist Zytek. Acceleration 0 to 62-mph takes less than 15-seconds, and top speed is 65-mph. Range should be 100-miles in normal use.

The T27 will have its first public demonstration this autumn, at a RAC rally, it could be in production within 2-years if the investors following the project give the go-ahead.