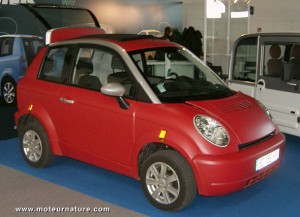 I wish there would be only good news and that this website would only give positive information. But I shall not hide from the harsh reality of the world. This past week, 2 small EV makers declared themselves insolvent. The first one is Think. That doesn’t sound like hot news, as I’ve already been reporting twice of its financial difficulties. The Norwegian EV-maker has been through 2 bankruptcies already (maybe 3, but I can only trace 2 right now), and the business perspective have never been darker. The Think City remains a good contender to anyone looking for an electric commuter, but low production volume brings high price. And everybody sees that if Think failed to reach profitability when it was alone, it will be much more difficult now that the big guys (Mitsubishi, Nissan) have entered the game.

Outlook isn’t better for the German manufacturer Ecocraft. It started in 2006 with a strong looking electric compact van, the EcoCarrier. It took the company a few years to convince its first customers, but things started to look good early this year. The German post office was planning to buy a bunch of its EcoCarrier model, and the EV was also about to become available on the French market. But both plans failed to materialize. Ecocraft is now looking a for a new investor, and he’d better come soon.

Yet, my belief that electric drive will prevail sometimes is unchanged. But we shall not dream. The time of the electric car will only start when someone will actually make money manufacturing them. I don’t see that happening before 2015 at the earliest. Everybody remembers that GM lost a fortune with the EV1, 10 years ago. Things haven’t changed much since then. Nissan is loosing money on every Leaf sold, and the finances of Tesla only look good when you compare them to those of Greece.

My only hope is that thousands will buy Nissans Leafs, the best EV ever made, and that Nissan will manage to make money out of it, giving other automakers an example of a EV success-story. I’m sure it will happen. I just can’t say when it will be.