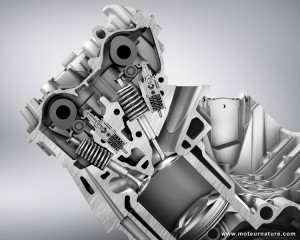 I love AMG engines. Not because they are green of course, I love them because they are made without any compromise. When AMG’s engineers have a choice between 2 ways to do something, one great way and another one which is bit cheaper, they don’t hesitate a single second and go for the best solution. Their new M152 engine is a close cousin of the twin turbocharged M157 which was recently introduced in the CLS 6.3 AMG sports saloon. It’s an atmospheric 5.5-liter V8, but it’s quite more than a simple M157 engine with the turbochargers removed. This engine has several unique features like a sky-high 12.6 compression ratio. A very impressive value for a street engine running on pump gas. It’s a mark of great performance, and great efficiency, but it needs a super smart engine management system to perform flawlessly. This engine certainly has one, a Bosch MED 17.7.3. This control unit can perform up to 260 million individual operations per second! They’re needed because of the infinitely variable camshaft adjustment of the 4 overhead camshafts. On both intake and exhaust sides, they operate 32 valves. Actually, the adjustment is carried out hydraulically via four pivoting actuators, which are electromagnetically actuated and controlled by the ECU. It just needs big computing power. 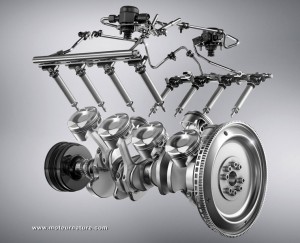 The fuel injection system is equally impressive. It’s a direct fuel injection system, functioning at the highest pressure of all gasoline engines worldwide. It operates between 100 and 200 bars. Only diesel engines do it better. And yet this engine isn’t heavy, it weighs only 187-kg (412-lbs). Another feature Mercedes seems to be quite proud of, is the cylinder shut-off system. It allows this V8 to run on only 4-cylinders. I’m not sure it matters a lot because it only works at part throttle. Driving at low-speed below 3600-rpm, the engine will sometimes run with only 4-cylinders. I’m sure it’s effective to reduce fuel consumption, but this is high performance engine for a high performance car, the Mercedes SLK 55 AMG roadster. Maximum engine speed is 7200-rpm. So this technology will make the car more fuel efficient in city commuting, but I give more importance to the fuel injection, and the smart valvetrain, to help the car be more fuel efficient on the open road.

Official fuel economy figure on the European cycle is 27-mpg combined. That is excellent for a 422-hp roadster with 398-lbs-ft of torque, that goes from 0 to 60-mph in less than 5 seconds. 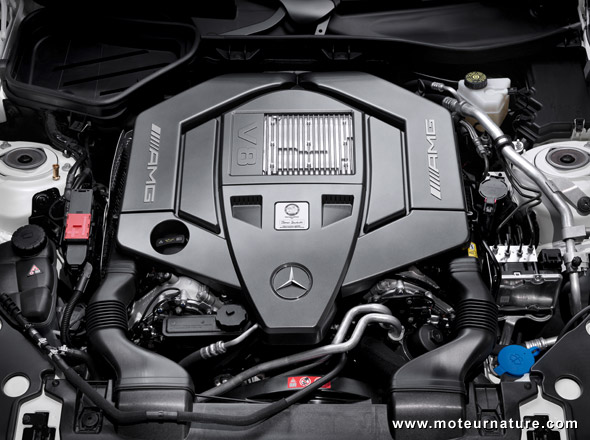 The Mercedes AMG 55 AMG will be unveiled at the Frankfurt motor show in September. It will be available before the end of the year in Germany.