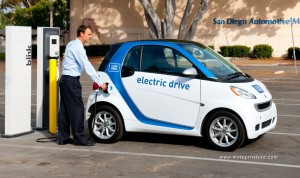 car2go is the car-sharing program created by the Daimler group. It was born in Germany, but it quickly crossed the Atlantic to start its service in Austin. The Germans have now gone all the way to the West. They’re launching car2go in San Diego. And the service will be even better than in Austin, because it will not use cars running gasoline. Car2go will use battery electric vehicles instead. The service will be quite big, it will start with 300 cars, all little electric Smarts. 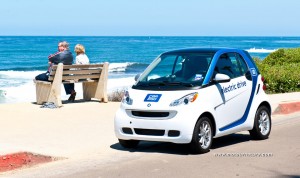 Things are impressive on the recharging side too, as car2go has partnered with Ecotality, a leader in electricity transportation and storage technologies, to install no less than 1,000 charging stations in the San Diego area. Considering the city has about 1,300,000 inhabitants, it doesn’t sound that impressive, yet 300 cars and 1,000 charging stations requires a large investment. It’s pretty big money going to electric car-sharing, and that is new.

The best thing about car2go is that users won’t have to take the cars at those stations, nor should they leave them there. Cars will be all around the city, where you’ll find them with an app on your smart phone. Users can just park them anywhere. car2go employees will come to pick them up if a recharge is needed. Sounds like a great service to me, for those who don’t need a car every day and never go far.