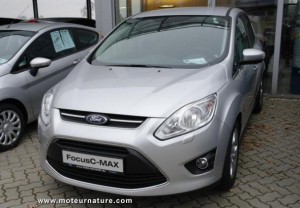 The new Ford C-Max has been launched last September in Europe, and it has been a hot seller since then. More than 100,000 have been sold already, and Ford is currently hard at work increasing its production capacity at its Valencia plant in Spain. The reasons of this success probably lies in the mix of good driving dynamics, great practicality, good value and a large choice of engines and versions, so you can get exactly the car you want. Surprisingly, Americans won’t get that choice.

You can have in Europe the standard C-Max, or the Grand C-Max which is 6-inches longer. Americans will only get the larger model, but I’m not surprised with this. Everything’s larger in America. Europeans have the choice of a 5-seater or a 7-seater, only the 5-seater will be available to Americans. There again, it’s easy to understand why. The 2-little third row seats are for kids only. I don’t think many Americans would accept to pay to get seats an adult can’t use. The surprise is what goes under the hood, or more precisely what doesn’t go there. We have a pretty large choice in Europe. Diesel or gasoline, atmospheric or turbocharged, small displacement or medium displacement, we have a choice of 8-different engines. It will be different in America, where people will be able to get any drivetrain they like as long as it’s hybrid.

I’m sure nobody had expected that. The Ford C-Max in the U.S. will be one the very few hybrid-only cars, like the Toyota Prius or the Honda Insight. I’m not sure it’s a wise move, as it’ll make the C-Max quite pricey, but at least it will put Ford in the same league as Honda and Toyota, and that’s worth millions. Actually, Ford will do it even better, as there will a be the choice of standard hybrid, or plug-in hybrid. I guess the C-Max nameplate will get famous!

3 thoughts on “Surprise: the Ford C-Max as an hybrid only in America”