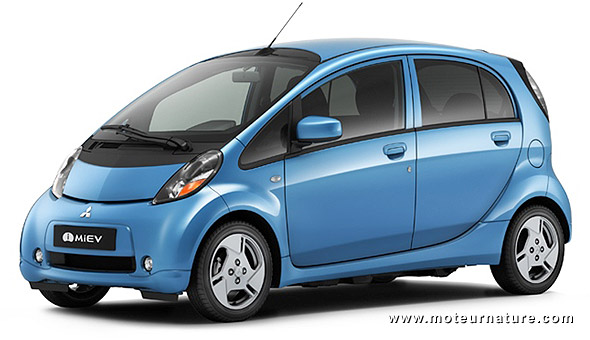 I would have wished the Nissan Leaf had that distinction since it won the European car of the year title. Unfortunately, at this time, the Leaf isn’t available anywhere in Europe. You can order it in Portugal and in the U.K. but you won’t get the car before several weeks.

Happily, Mitsubishi will be more than happy to satisfy your hunger for electric cars. Its i-MiEV is available right now in 14 European countries: Belgium, Denmark, France, Germany, Ireland, Italia, Monaco, the Netherlands, Poland, Portugal, Spain, Sweden, Switzerland and the U.K.

If you add Japan, where the Mitsubishi i-MiEV has been available since 2009, this electric car is available in 15 countries, and that is a world first! Never before has an electric car been available in so many different places around the world. The GM EV1 was only available in the U.S. (I know, I tried to buy one in 2000, and when I heard GM was about to crush them, I tried again to get one, on the behalf of a French automotive museum, which would have keep one for posterity, but I was told this was not possible). PSA Peugeot-Citroën sold thousands of electric cars, but they were only available in 5 European countries.

So Nissan might take the lead sometimes later, but as of today, Mitsubishi is the world’s leader in electric cars.